on the right side of righteous 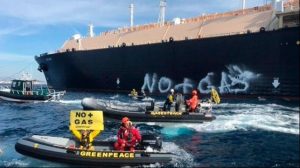 For the third time this month, activists from Greenpeace staged a protest aimed at disrupting natural gas operations in their efforts to call attention to their causes in the lead-up to the United Nations Climate Summit. Protestors blocked the Enagas gas terminal in the Valencia region of Spain.

The protest began mid-morning when Greenpeace’s largest ship, the 2,000 gross ton Esperanza anchored off the port of Sagunto. The ship was positioned to block the entrance to the gas facility coordinated with the arrival of a gas carrier from the United States. Greenpeace launched zodiacs displaying banners and seeking to further disrupt operations.

The 73,000 dwt gas carrier Merchant was arriving from Texas loaded with a cargo of 178,000 cm of liquefied gas that Greenpeace said was produced through the controversial fracking process. The captain of the gas carrier remained outside the harbor during the protest. At one point during the protest, Greenpeace’s zodiacs came alongside painting the words “no gas,” in English and Spanish on the hull of the vessel. Read on.

this little piggy flew to market

back to the future?