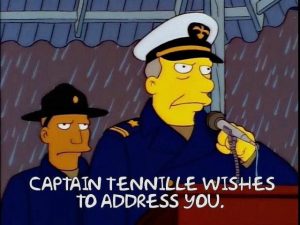 This is your captain speaking. At ease.

Ladies and gentlemen, it has come to my attention that some of you may be disturbed by the recent news that the New York Yacht Club has withdrawn its challenge for the next America’s Cup. Indeed, many traditional supporters of our sport have seen this announcement as the end of the world as we know it.

So I was anxious, on your behalf, to learn the background to the NYYC decision and was confident that my colleagues at last night’s Management Committee meeting of the Cripple Creek Sailing & Croquet Club would have all the inside dope from New York. Regrettably, I was unable to attend because of a prior commitment to officiate at the post-Covid re-opening of our local Hooters establishment.

However, it so happens that my beloved bride Tennille was entitled to attend the meeting in her capacity as the club’s Entertainment Officer & Honorary Pole Dancer. She has provided the following information:

*  The NYCC America’s Cup Committee cannot accept that a UK billionaire and Kiwi professional sailor – both of whom are merely “in trade” rather than being true sportsmen – could possibly devise an adequate set of ‘Protocols’ for the next series.

*  Further, they are of the view that only they can summon the knowledge, experience, rat cunning and sheer bastardry to devise a set of rules that would guarantee they win.

*  More to the point, the gentlemen of 44th Street (and they are all men) have declined to bestow the honor of being the challenging club on the Stars+Stripes or American Magic syndicates on the basis that they believe neither have a snowball’s chance in hell of being competitive.

But I am delighted to report that Ms Tennille also had some good news. It appears that the Cripple Creek Sailing & Croquet Club is ready and willing to fill the breach! They will tomorrow file an official Deed of Gift challenge for the Cup to shame the NYYC soft-cocks and uphold America’s sporting honor.

The Cripple Creek challenge is to be funded by a Mr D. Trump of Florida, currently unemployed, but whose beautiful yacht Perjury II has often been seen in local waters. Free Make The America’s Cup Great Again baseball caps will shortly be available from the club bar.

who you calling a pussy?