clean up in aisle pacific 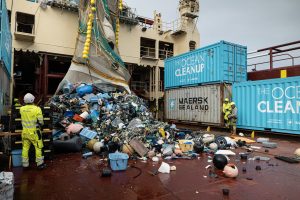 The Ocean Cleanup, the non-profit developing and scaling technologies to rid the oceans of plastic, announce proof of technology upon returning to Victoria Harbour with trash collected from the Great Pacific Garbage Patch. With this confirmation, the organization will immediately return to the infamous gyre to start cleaning the ocean’s largest accumulation of plastic debris.

Eight years after its founding and three years since launching its first cleanup system, the organization has effectively harvested plastic with a scalable ocean cleanup design. The Ocean Cleanup has ended its testing campaigns in the gyre, shifting its focus to cleanup; while, simultaneously, initiating the development of the larger, upgraded System 003, which is expected to be the blueprint design for scaling to a fleet of systems.

“Today, I am most proud of the team and supporters for their dedication and perseverance that brought us to this moment,” says Boyan Slat, Founder and CEO of The Ocean Cleanup. “Getting here was not always easy, but we remained focused on our mission and its necessity. While it’s just the tip of the iceberg, these kilograms are the most important ones we will ever collect, because they are proof that cleanup is possible. We still have a lot of things to iron out, but one thing we know now is that, with a small fleet of these systems, we can clean this up.” Read more.