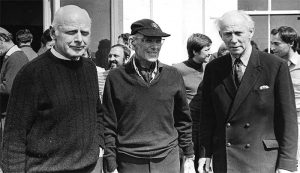 Short-handed sailing is here to stay and Plymouth’s Royal Western Yacht Club (RWYC) is leading the way with a host of short-handed sailing opportunities designed to whet the appetite of sailors who, due to the Covid situation, have been starved of races, up until now.

In 1960 the Club, which was founded in 1827, introduced an innovation that had a profound effect on ocean racing – short-handed races. The first Observer Singlehanded Transatlantic Race (OSTAR) was the result of a request from Lt.Col. H.G. (Blondie) Hasler to organise a singlehanded race against the prevailing winds and current across the North Atlantic. Five yachts sailed from Plymouth to New York with Francis Chichester coming first in Gipsy Moth III. This was followed in 1966 by the first Two-Handed Round Britain and Ireland Race (the RB&I), and in 1981 by the Two-Handed Transatlantic Race (or TWOSTAR) — and so a tradition was established.

The OSTAR and Double Handed RB&I remain two of the best-known and most influential races in the world and the RWYC, a pioneer in short-handed sailing, has once again been key in progressing the sport to what we see today. The OSTAR went on to provide a breeding ground for some of the world’s top oceanic solo sailors such as Loick Peyron, Eric Tabarly and more recently, Pip Hare. This format was later to inspire such races as the Route du Rhum and the Vendée Globe. Indeed, it is here that the Fastnet Race originated in 1925. Read on.

angle of the dangle