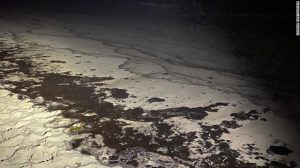 In an enforcement order released Tuesday, the U.S. Department of Transportation’s pipeline regulator said that the operator of the ruptured crude line off Orange County had indication of a breach several hours before it shut down the line or reported a potential spill.

At about 0230 hours on Saturday morning, the control room personnel for operator Beta Offshore received a low pressure alarm on the San Pedro Bay Pipeline, an indication of a potential breach. According to the Pipeline and Hazardous Materials Safety Administration (PHMSA), Beta Offshore reported that the line was shut down at 0601 – more than three hours after the alarm.

Beta Offshore did not report the possibility of a breach to the U.S. Coast Guard’s National Response Center (NRC) until 0907, more than six hours after the first alarm. Read on.

killing it The Killing 3 project has been progressing along nicely as the snow and ice has melted in Toronto and we’re starting to think about sailing again.