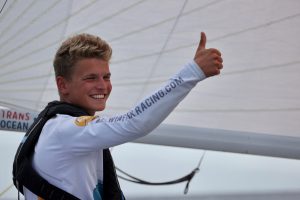 This is a cool story. Kid’s got some balls, no doubt!

This Thursday at 16:05, Melwin Fink crossed the finish line of the first stage of the 23rd Mini Transat Eurochef, completing the 1,350 mile course between Sables d’Olonne and Santa Cruz de La Palma in the first position in Series boats. The skipper of the Pogo 3 in the colors of SignForCom who took control of the fleet on October 2, south of Cape Finisterre, has shown daring by continuing his race when his competitors have made the choice to collectively take shelter to avoid the passage of an active front off Galicia. From then on, he gained a more than substantial lead over his rivals before achieving a remarkable trajectory at the end of the race. The young German sailor, only 19 years old, certainly struck a big blow and took a good advantage before Act 2 of the event.

Q: You are both the first German but also the youngest skipper to win a stage in the Mini Transat. What do you feel ?

A: I don’t really know yet. I never dared hope for something like this! I was a little lucky and probably made the right decisions too. Either way, it was hard. I hesitated to go to the front or not. In the end, everything went well because everything went exactly as planned. The conditions that I had were completely in accordance with what the weather forecast announced since I had 30 knots of average wind, with gusts to 40. Finally, the first front that swept the fleet in the Gulf de Gascogne was more violent than this second.

Q: Did you know or understand what was going on in the rest of the fleet?

A: After receiving the notice from BMS, I heard exchanges on the VHF but I did not understand that some people think of sheltering thirty-six hours before the front passage. I thought it was very early to decide to put his race on hold. I spoke with Christian Kargl. We decided together to continue to go as far south as possible and, when the time came, to choose whether to reach a port or not. As we advanced, we were able to realize that, as had been specified in the weather report, the conditions south of the latitude of Porto were manageable and that, therefore, there was no reason to stop.

Q: Could you have imagined such a scenario at that time?

A:  Not this moment. It’s going to be a big advantage for the second leg, that’s for sure. It was a big decision but I weighed it well. I never felt like I was taking big risks. Before the arrival of this second front, my boat was in perfect condition, without any damage, even after the first gale in the Bay of Biscay. Thirty knots with gusts of 40 is a lot but we have strong boats, the possibility of reducing the canvas in different ways and a lot of options for securing the mast. My only fear was to see it fall because the waves were quite big but everything went well. ”

Q: You were daring, but you also sailed perfectly afterwards, notably increasing your lead from 60 to 100 miles over the Austrian Christian Kargl after passing through Madeira …

A: One hundred miles, really? Wow! I didn’t think so much! I made my own way, without asking myself any questions but simply doing things as I felt them, quite simply. ”

A: I can’t believe what’s happening to me!” I dreamed of a Top 10 before leaving and here I am the first boat to arrive in La Palma with an important lead over the second! It’s crazy ! It puts a little pressure on me for the second stage but nothing is settled. There are going to be a lot of downwind conditions. We will see how it will turn out.

Wildly inappropriate, I nonetheless chose this song for title inspiration because of the battles this 19-year-old faced. – ed.