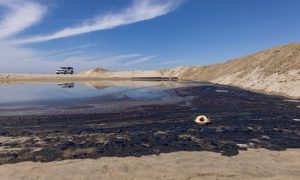 An estimated 126,000 gallons leaked from an underwater pipeline in one of the largest spills in recent state history

Temperatures in southern California surged on Sunday, but Huntington state beach was devoid of the umbrellas and beach blankets that would typically line its shore.

Instead, public works officials were working feverishly to stop the spread of an estimated 126,000 gallons of heavy crude oil that leaked from an underwater pipeline over the weekend in one of the largest spills in recent California history.

The spill is suspected to have originated in a 17.5-mile pipeline located 80-100ft beneath the surface off the Orange county coast. The pipeline connects to an oil production platform named Elly, which in turn is connected by a walkway to a drilling platform named Ellen. The platforms and another nearby platform are in federal waters and owned by the Houston-based company Amplify Energy Corp.

People who live and work in the area said they noticed an oil sheen and a heavy petroleum smell on Friday evening. The coast guard confirmed on Saturday afternoon that an oil slick had been spotted, and established a unified command. Amplify Energy Corp shut down operations of the pipeline and the platforms later that day. The company’s CEO, Martyn Willsher, said the pipeline was suctioned out so no more oil would spill. More here.