do that to me one more time 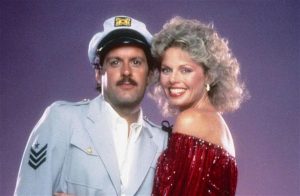 Ladies and gentlemen, it has come to my attention that there is some confusion in the ranks about the conduct of the next America’s Cup. Many of you are wondering where it will be held, who will take part, what boats are to be sailed, and the format of the series.

Rumors have been circulating that the event is in total chaos. Nothing could be further from the truth! Please stand by. All will be made clear.

It so happens that my beloved bride, the delectable Tennille, has been able to gather some useful intelligence on this subject. While I was conducting a Captain’s review of certain websites that specialize in fine examples of the female anatomy (as befits an officer of my rank), Tennille was having a few quiet piña coladas at our favorite watering-hole, the Cripple Creek Yachting & Croquet Club.

Many of the regular Cripple Creek patrons call themselves professional sailors. You can tell them by their bleached long hair, fading floral shirts and permanent sunburn. In truth, they’re just a bunch of boat bums, but they claim to be well connected to the people who run the America’s Cup. Here’s what Tennille was able to establish after buying them a few drinks – and a bit of mid-strength flirting:

1)  The next America’s Cup series will be held in either the waters off Cork in Ireland, Barcelona in Spain – or, maybe, Valencia – possibly Cowes in England, Auckland in New Zealand or perhaps somewhere in the Middle East with a harbor. Then again, if things go pear-shaped in the New York Supreme Court, it could be sailed off Newport, RI. Who knows?

2)  The defenders of the Cup will be Emirates Team New Zealand, or just plain Team New Zealand if, as seems likely, Emirates don’t renew the sponsorship that expired at the end of the last Cup. Technically, the defenders are the Royal New Zealand Yacht Squadron but they’re just a front. So the actual defenders are likely to be Grant Dalton’s mob, or, on the other hand, a new syndicate headed by a Kiwi millionaire called Hamish somebody-or-other, and Brad Butterworth (remember him?)

You gotta hand it to Tennille for getting all this stuff cleared up so well. OK, next:

3)  The Challenger of Record is the Royal Yacht Squadron in England. No it isn’t. It’s actually something called ‘Royal Yacht Squadron Racing’. But that’s not a club, it’s a legal invention. In fact, the real challenger of record is a huge chemicals corporation called INEOS. Well, that’s if their challenge isn’t thrown out by a New Zealand challenge in the Supreme Court of New York. Or, a challenge (in the same court but not at the same time) by the New York Yacht Club.

Got all that? It’s pretty simple stuff.

I trust this has made everything clear. The America’s Cup is in perfect order. Plain sailing, really. That is all. Return to your posts and resume normal duties.