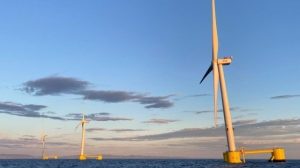 “The project has performed well above expectations. It has registered high levels of availability and a production that has exceeded expectations for many months,” said EDPR project director said José Pinheiro. “We wanted to share these positive results of a project that has marked a ‘before and after’ in the offshore wind energy industry because of the technology used and because it has become the first floating and semi-submersible wind farm in the world.”  Read on.