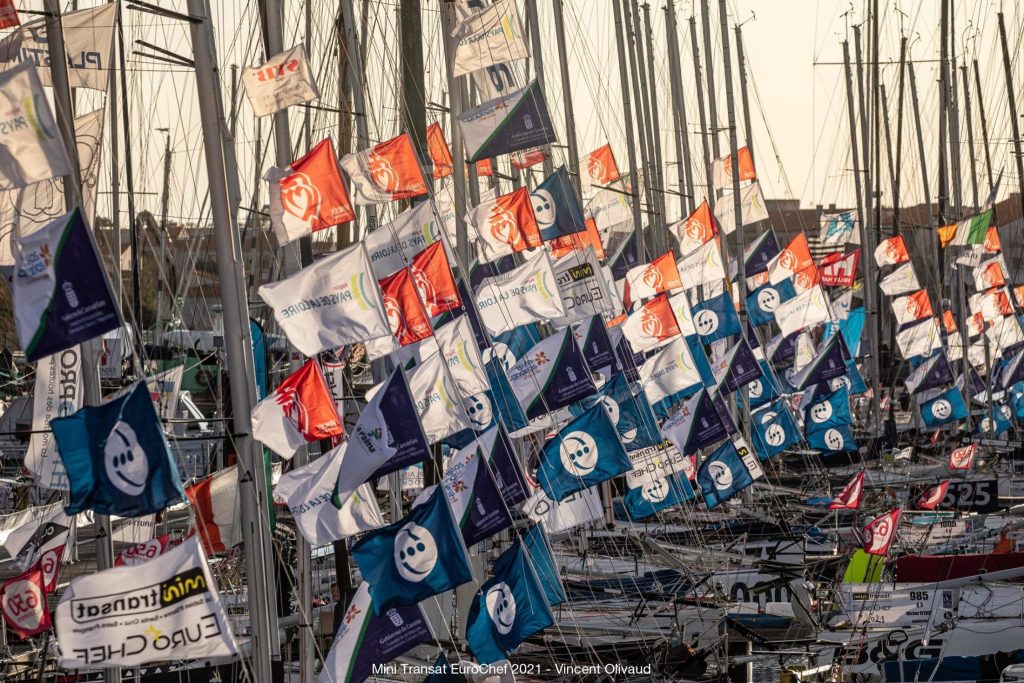 Perhaps no race says ‘Sailing Anarchy’ more than the infamous Mini Transat. Solo sailing across a big and oftentimes unforgiving stretch of Atlantic Ocean on radical little ocean racing steeds that measure in shorter than most day sailers, everything about the race pulls at our heart strings. With cutting edge technology, the exploration of new ideas and the champions of tomorrow sailing boats that are oftentimes home built one-offs, the race is as iconic and legendary as it is fascinating. Despite all of the challenges imposed by the current state of the world, the 23rd edition of the Mini Transat begins this Sunday in the famed port of Les Sables d’Olonne; home of the Vendée Globe.

Again showing how much pent-up demand there is to go sailing right now, an oversold fleet of more than 125 sailors reportedly applied for the coveted 90 available spots which make up this very deep and talented fleet for the 23rd edition. With around 66 Series and 24 Prototype boats expected to start, this year’s fleet is again a very international affair that sees nearly one-third (29) of the skippers hailing from countries outside of France. A large Spanish and Italian contingent will be on the line for the 4,050 nautical mile race which will consist of two legs, with the fleet finishing once again in the Caribbean island of Guadaloupe. The race’s multi-week stopover will be in Santa Cruz de La Palma, in the Canary Islands, which is currently getting wrecked by a major volcano eruption.

With some increasingly radical boats being launched in the lead-up to this race including several foilers, scow-bow rippers and some now very-refined Series designs, perhaps none are more interesting than the lone American entry of 36 year old Jay Thompson. An innovative foiling Guillaume Verdier design that he built himself, his newly-christened boat 936, now dubbed Speedy Gonzales, could prove to be one of the race’s great surprises.

A very accomplished sailor who has raced everything from beach cats to TP52s, he’s recently been racking up miles on Figaro’s, Class 40’s and IMOCA’s, where he’s become a highly sought-after shore crew and preparateur while in France. Working with Alan Roura’s La Fabrique, among other teams, in the lead-up to the last Vendée Globe, he’s been pulling long days and even longer nights to get Speedy G up to speed before the Transat. Still not fully optimized in light-air and other conditions, he’s nonetheless managed some solid results including a 7th in the fluky and funky Mini Fastnet race that ran an altered course due to COVID. Downwind in a breeze – which the Transat should include plenty of – we won’t be surprised to see Thompson duking it out for a spot on the podium. (Facebook: Coconuts Sail Team, Instagram @JayThompsonskipper

At the head of the fleet, certainly Tanguy Bouroullec and his Pogo Foiler 969 should be quick and in it to win it, barring failures or UFO strikes. Dominant over the past two years of Classe Mini racing, his two 4th place finishes in the Transat (in both Series and Prototype division) have him longing for a podium finish. With a more refined package than the fresh out of the box boat that failed to live up to it’s full potential in 2019.

Bourollec and 969 should be considered a favorite, as well as Pierre Le Roy on 1019/ Teamwork. 5th in the last Transat on a Series boat, the professional meteorologist is back on a self-built Raison designed prototype Scow that is an evolution of the boat that won the last two races under the skillful hands of Ian Lipinski and François Jambou. That famous Raison design 865, had it’s masthead profiled on the front page of this very site just a day or two ago during it’s recent stability test, and almost surely won’t be off the pace under the guidance of Romain Tellier.

In the massive Series fleet, Olympic 470 veteran and pro sailor Gaël Ledoux has been fast on his Pogo 3, though remains humble in his aspirations. Another dinghy sailor and match racer, Cécile Andrieu has been putting in stellar results on her Pogo 3 as well, and could prove to be the Clarisse Cremer of this year’s event; don’t be surprised to see 893 well up the leaderboard. Since growing up in the company of some top up-and-coming talent, the young and clearly talented Brieuc Lebec chose to pursue business interests in Hong Kong.

Five years behind a desk had him longing to go sailing, and since picking up his Pogo 3 Velotrade/ 914, top results have come quickly and Brieuc is clearly aiming for the podium. There are too many good skippers on nearly equal boats to pick a favorite in the Series fleet, make sure to hit up the Skippers page on the race website to read the always interesting and diverse backstories among the fleet.

Departing from Les Sables d’Olonne on Sunday, the fleet could see some frontal headwinds before a light-air transition zone that will make the passage of Biscay anything but straight forward and provide for plenty of opportunities to make up, or lose, a lot of ground. A few days into the race however, a forming Azores High should create a strong northerly flow that creates classic Mini Transat surfing conditions down the Portoguese trades and toward La Palma in the Canaries. Follow the race and the tracker at https://www.minitransat.fr/en/

and away they go!