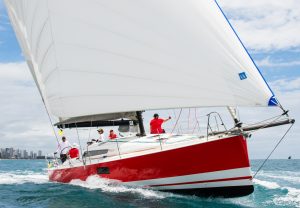 Offshore racing yacht owners in south-east Queensland looking to qualify for major events, including the Rolex Sydney-Hobart Race, have had their task made much easier via a new event organised by Southport Yacht Club.

Titled the South-East Queensland Ocean Racing Qualifier, the 220-nautical-mile passage race will start on Moreton Bay on November 12. The course is designed to test sailing and navigation skills in smooth water and rough plus varying tidal conditions by day and night.

“We worked closely with officials from Queensland Cruising Yacht Club in the planning stage and It was decided that we should have a single streamlined event that will qualify yachts for all major events on the Queensland coast, plus passage races like the Rolex Sydney-Hobart race. It will also give yacht owners and crews the chance to hone their skills in readiness for Southport Yacht Club’s Quoin Sail Paradise Series which will be staged from January 3-6, 2022.

We Have Another Winner