From our Fabulous Forums, brought to you by Marlow Ropes. 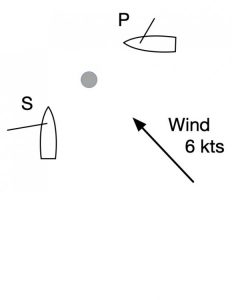 This really happened in today’s race.  The SI (for reasons that made sense to nobody but the RC) specified a starboard rounding.  WTF?  Unfortunately, one boat didn’t read the SI carefully enough and thought they were doing a port rounding.

As far as I can tell, rule 18 applies; both boats are required to leave the mark on the same side (regardless of the fact that one of them doesn’t know that) and they’re both in the zone.  None of the exceptions in 18.1(a)-(d) apply.  They’re clearly overlapped, so 18.2 applies but beats me which boat is inside or outside.  The next mark was upwind, so proper course to the next mark for S would be to harden up to close-hauled on starboard, not that I think that matters to the rule.

Any idea what rules actually apply here?  In reality, S hailed to P that this was a starboard rounding and P headed up to round the proper way, several boat-lengths behind P, and got to chat about it back at the bar.  I was the skipper of S.  Last I saw, the skipper of P was looking for the RC chair to give him shit about putting starboard roundings in the SI. Jump in.

Title inspiration can be found here.