it was a good day 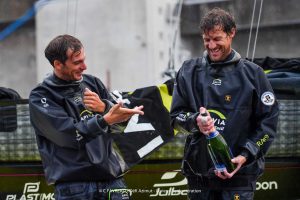 Another good race for Charlie Dalin and Paul Meilhat on the IMOCA 60 Apivia, who displayed utter dominance over the rest of the fleet on the 500-mile offshore tune-up race that is the crown jewel of the Defi Azimut regatta.

Showing superior boat speed upwind in the light at the start, the duo would only continue to build their lead throughout the race as they won by the substantial margin of 2 hours in a race that took the leaders only 1 day and around 16 hours to complete. With a course that consisted of upwind, downwind and hard reaching – with conditions from very light to the passage of a front with its associated big breeze – this Defi Azimut 48 hour race was a complete test of both man and machine.

Behind them was the constantly improving, and impressive, duo of Justine Mettraux and Simon Fisher on 11th Hour’s ‘B’ boat Alaka’i. Locked into a fascinating battle with the other podium contenders, we’ve gotta give props to ‘Si-Fi’ and Justine’s tactical and navigational prowess for taking a flyer to the south to gain more breeze and a better angle on the VMG run and then moving into second place over Thomas Ruyant and Morgan Lagravière onboard LinkedOut.

It was a weekend of ups and downs for the American team 11th Hour Racing, however, as they took out the relative drifter of a ‘Speed Run’ with their new boat Mãlama, though were forced to retire from the 48-hour test with a broken tiller arm. Despite some minor teething issues of a brand new build, the team has to feel good about their chances with both boats and doublehanded duos looking on point headed into November’s TJV.

After a dominant run-away performance in both the Rolex Fastnet race and the Defi Azimut’s offshore race, Apivia has to be considered the pre-race favorite for the upcoming Transat Jacques Vabre, a race that Charlie Dalin won two years ago with then co-skipper Yann Elies. With sister company MACIF tasting victory in the 52nd La Solitiare du Figaro at the hands of Pierre Quiroga, it was certainly a good weekend of yachting for the French insurance giant, who continues to rack up wins in a variety of disciplines since divesting from big trimaran racing and focusing on smaller monohulls. – Ronnie Simpson.