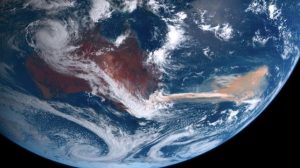 In 2019 and 2020, bushfires razed more than 18 million hectares of land in Australia. For weeks, smoke-choked major cities, leading to almost 450 deaths, and even circumnavigated the southern hemisphere.

As the aerosols billowed across the oceans many thousands of kilometers away from the fires, microscopic marine algae called phytoplankton had an unexpected windfall: they received a boost of iron.

Our research, published September 15 in Nature, found this caused phytoplankton concentrations to double between New Zealand and South America until the bloom area became bigger than Australia. And it lasted for four months.

This enormous, unprecedented algal bloom could have profound implications for carbon dioxide levels in the atmosphere and for the marine ecosystem. But so far, the impact is still unclear. Read on.