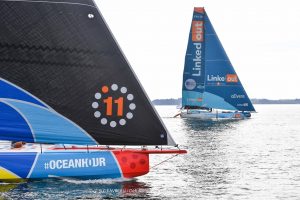 Sure it may not mean much in the grand scheme of things, but we’re stoked to see 11th Hour Racing’s brand new IMOCA 60 Mālama take out the W in her very first competitive outing off of Lorient today. In light, non-foiling conditions, the duo of Charlie Enright and Pascal Bidegorry managed to lay down a fastest run of 6:53 over the 1 NM reaching course to best Thomas Ruyant and Morgan Lagraviere on LinkedOut by 7 seconds and claim victory in the Defi Azimut’s famous speed run competition.

The first IMOCA built for the Ocean Race’s more varied round-the-world race track as compared to a Vendée Globe which includes far less light air and upwind than the Ocean Race, we can only speculate that the new 11th Hour whip is going to excel in light-air transition zones when compared to her more reaching and running optimized rivals.

Obviously not one to take a defeat lying down, 2nd place skipper Thomas Ruyant has just yesterday announced a brand new build ahead of the next Vendée Globe! The 14-strong IMOCA fleet will take off on their 48-hour offshore race tomorrow, as the last major tune-up ahead of November’s Transat Jacques Vabre.