candle in the wind 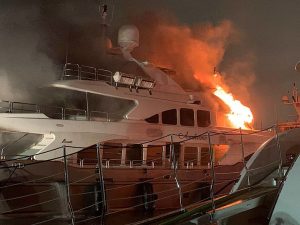 The 2019 loss of the superyacht Andiamo in Miami was caused by unattended candles, an inoperable fire alarm and too much firefighting water, according to a new report from NTSB.

On December 18, 2019, the 120-foot yacht Andiamo was moored at the Island Gardens Deep Harbour Marina in Miami. The six crew members aboard the yacht were preparing for the arrival of a guest of the owner. While getting spaces ready, two crewmembers found that the lighting systems in the lower level were not working.

When the guest arrived at about 1910 hours, the lights were not working; to solve the problem, the chief stewardess lit several candles and set them on top of a dresser, right beneath the curtains for a porthole. She then left the wood-paneled suite with the guest, leaving the candles unattended.

what are the odds?