lahaina (do we have to) return 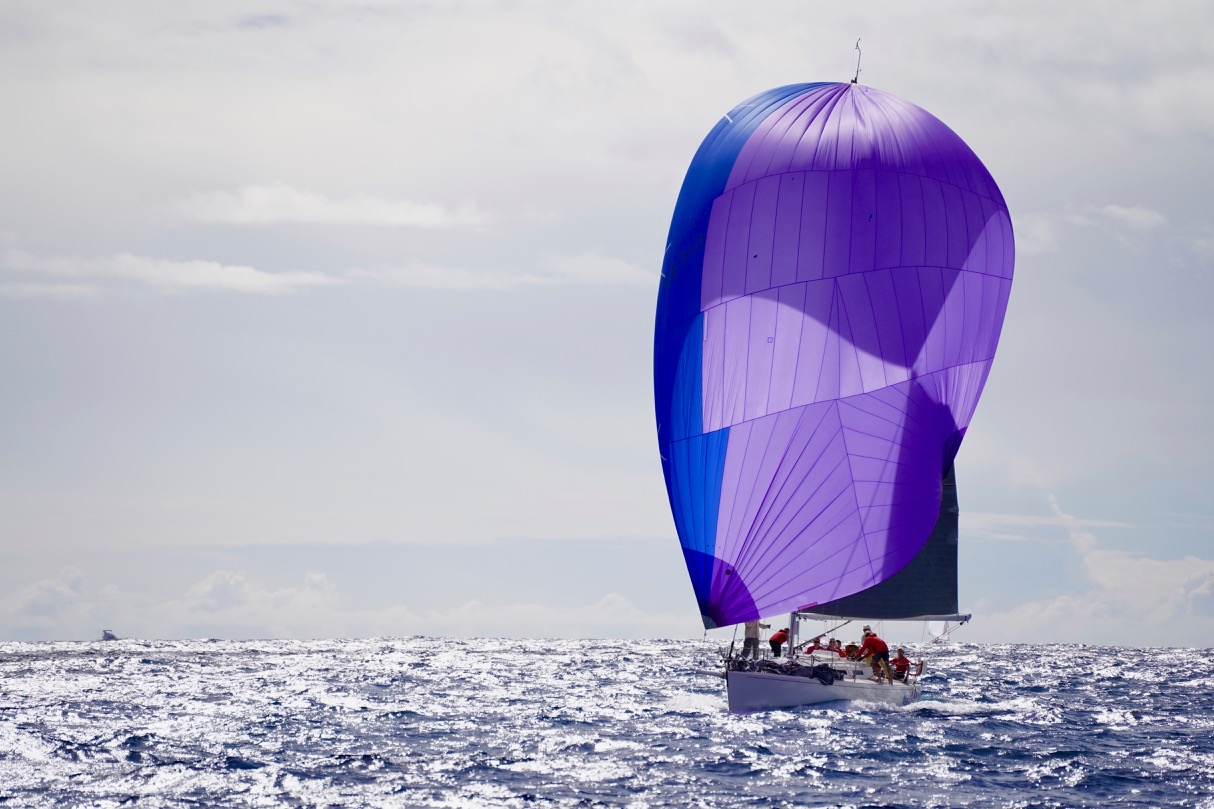 A race that nearly didn’t happen – the annual Labor Day classic from Maui to Honolulu – went down on Monday in picture-perfect Hawaii conditions. Effectively a poor man’s Transpac, the Lahaina Return Race is an 80 mile downwinder from Honolua Bay on Maui’s northwest side to Honolulu’s Ala Wai Harbor. An epic downwind race accompanied by an inshore regatta and a long holiday weekend of partying in the rustic old whaling port of Lahaina, this event is one of the most anticipated on Hawaii’s sailing calendar.

As the Aloha State deals with a surge in COVID cases due to the highly transmissible Delta variant, however, this year’s event looked like it would suffer the same fate as last year’s race and get canceled due to the virus. Due in large part to the dogged persistence of Joe Bardouche, owner and skipper of the 1D35 Knot Right, the event permit was issued even as restrictions on social gatherings and events are coming back into play. The race was on!

The first inter-island race since COVID started, the Hawaii sailing fleet was chomping at the bit-to-go racing and an impressive number of Oahu boats managed to put together the logistics required to get themselves 80 miles upwind to West Maui for a weekend of yacht racing. The Lahaina Lights inshore regatta took place on Saturday in picture-perfect Lahaina conditions; i.e. shifty as fuck and sorta light with flat water. In 6 – 14 knots of breeze, about 16 boats were on course ranging from Santa Cruz and Antrim 27s to a TP 52.

The boat of the day was no doubt Steven Stock’s Waikiki-based Tartan 10 Whisper, who was simply unbeatable in three races. Going both upwind and down with faster-rated boats, the green Tartan was well sailed and executed nearly flawless crew work to put up a picket fence and win the day. Well done, Whisper!

After a fun-filled weekend of COVID-safe camaraderie in Lahaina, Monday morning’s race got off to an early start with the first boats rolling across the start line at 8 am in grey, squally skies that made for faster-than-expected conditions and some popping rainbows.

Again due to logistical challenges and a last-minute permit issuance, there was no Race Committee from Honolulu, but the Lahaina Yacht Club stepped up big and managed to get an RC boat to set a line and start the race on time. After a jib reach across the first half of the Pailolo Channel in about 15 knots, kites started going up as the breeze shifted aft and then it became a VMG running race down the north shore of Molokai. 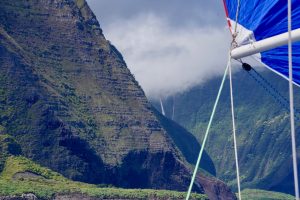 World-renowned for being home to the tallest sea cliffs on the planet, the sail down Molokai’s north shore is easily one of the most scenic sails in Hawaii and the conditions played ball to make this year’s sail about as good as it gets. Conditions were fairly light by Hawaii standards; breeze in the mid-teens and topping out at about 20 knots true; a lot more mellow than the typical 30 knots and big seas and certainly better than the forecast which looked light and slow.

I sailed on Suzie Grubler’s Lahaina-based Express 37 One Eyed Jack. We sailed well for the most part, but got the kite up a bit too late, and then took it down a bit too late and put up too small of a jib for the brief reach to the finish. We didn’t set any course or speed records, but it was a nice day on the water and we know where we can improve.

Confirming our improper sail selection at the finish was Travis Scott’s Farr 38 Quicksilver who rolled us hard right at the finish to beat us boat for boat by about 5 seconds and to win our division on handicap. Sailing low and slow down the course and making very few mistakes, those guys proved hard to beat and took a well deserved win. Well done, Travis and crew. 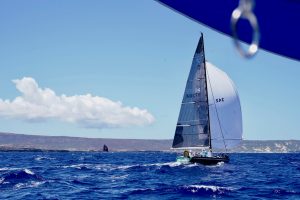 Again winning overall was Steven Stock’s Tartan 10 Whisper, who was frustratingly hard to pass on the water, even though we owed them a lot of time. Second and third in division and in the overall were the two Santa Cruz 27s 86’d and Morning Missile, who had a nice match race going on from start to finish and managed to finish together and were still crossing tacks into the harbor after the finish. One of my good friends was on Morning Missile and his smile after the race confirmed why we do this silly sport. He is a big boat sailor and an F18 sailor, but after sailing a little Santa Cruz ULDB downwind in the trades for a day, he confirmed what Bill Lee has been preaching since the 60’s; that “Fast is Fun”.

As nice of a day as it was, there was still some carnage. Dr. John Myhre’s TP 52 Loco Motion 2 was ripping towards the finish when they put the bow up to lay the Diamond Head buoy and broke a halyard. After a bit of a Chinese Fire Drill, the boys and girls got it all sorted out, but it sounds like a man went aloft to clean up the mess and there was some general drama. It’s good to see Loco out and sailing well, though. The boat is looking great and very fast; an older TP 52 sure is a great all-around platform for inshore and offshore in a windy place like Hawaii.

One of the other very quick boats in the fleet also had some drama when approaching the finish. Peter Hershorn’s modified Formula 28 catamaran Illusion dismasted when a cap shroud reportedly failed, bringing the rotating carbon rig down about as gently as is possible. Sailing with multihull legend Randy Smythe onboard, Illusion would have been no doubt lit up when it happened, but fortunately it sounds like no one was hurt and the boat looked fine when I saw it at the club, aside from the rig being horizontal rather than vertical. Also, big props to the Illusion team for managing to self-rescue and motor themselves into the finish with the rig sitting nicely on deck.

Massive props again have to go out to Joe Bardouche, who quite simply made the race happen in regards to navigating the Hawaii bureaucracy at a particularly challenging time. And also to Lahaina Yacht Club for their hospitality over the weekend and at the start, and to Hawaii Yacht Club for receiving the fleet and doing as well as they could to extend their aloha within the confines of the COVID-safe rules and current level of restrictions on gatherings. Results can be found here.

Aloha from the islands,