An interesting look at the origins of Topanga Yacht Club, such as it was… 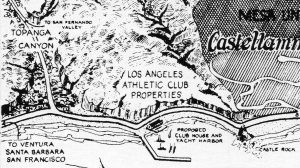 In 1924, the Los Angeles Athletic Club bought Topanga Beach with the intention of building a yacht harbor.  To promote the cause, British actor Captain Vesey O’Davoren (1888-1989) founded the Topanga Yacht Club in 1928.

He proudly claimed descent from two English Prime Ministers, William Pitt (1708-1778) and “Iron Duke” Arthur Wellesley (1769-1852), as well as a family of medieval Irish scholars. His title, Captain, came from serving in the British Royal Air Force during World War I, where he was injured several times, including by a mustard gas attack that left him voiceless.

In 1920, he left England, for better acting opportunities in Hollywood. He could still work because films were silent, and recovered his voice in time for the advent of sound films in 1927, but mostly played butlers.

He did not live at Topanga Beach. Hardly any of the club’s members did.

Topanga was simply a preferred shelter for small boat owners before the bay had marinas or breakwaters. Read on, thanks to The Malibu Times.