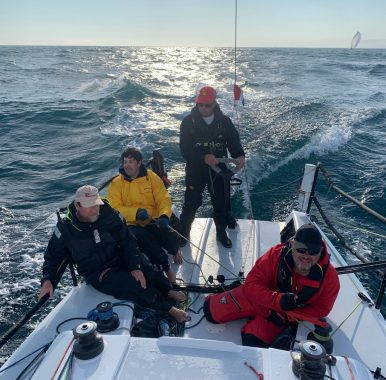 This year’s Santa Barbara to King Harbor race was one for the record books and turned out to be a Hobie day for sure with five Hobie’s competing and over 70 entries, the overall winner was Captain Sluggo a turbo Hobie 33 from Santa Barbara.

This year‘s race started out with overcast skies with 10 to 12 knots of breeze out of the Southwest, Steadily building to 20 knots on the 25-mile crossing to the West End of Anacapa island.

Captain Sluggo with her code O was seeing speeds of 15 knots coming into the island, a pretty typical race.

At the west end of the island, we then set the A2, ran down the island with solid breeze, with none of the typical back eddie or light spots as you usually experience rounding Anacapa island.

Once clearing Anacapa island on the 25-mile leg to point Dume, it was apparent by the sea state and the forecast that it was going to become quite sporty as we approached Point Dume!

Midway across the channel The breeze now increasing to 25 knots with gusts to 30, time to gear up; lifejackets, safety harness, and prepare for the Famous Dreaded Gybe off Point Dume.

Meanwhile, the carnage on the course was starting, with spinnakers shredded, boats getting knocking down, Spinnakers disappearing on the horizon, some sailing under jibs alone.

Captain Sluggo now sailing along with hatch boards in, steadily at 19 knots under A2 spinnaker and a full main, with 30 knots of breeze was flying along like a top fuel dragster with the driver’s hair on fire and on crack over and through the waves and was approaching point Dume on port tack.

Meanwhile, a Santa Cruz 50 and an MC 31 were quickly approaching on starboard tack (in other words they had right of way) Captain Sluggo on a collision course had to make a quick decision to avoid a collision, not pretty with both boats doing 20 knots.

Captain Sluggo’s crew blew the spinnaker halyard, Gybed the mainsail and reset spinnaker for the 22 mile sprint into king Harbor, and now the wind has backed off to 20 knots and continued to back off as we approached king harbor, time to take a breath and open the hatch.

Captain Sluggo sailing in ULDB class C had her sights set on the finish line and knew she was doing quite well when she had sailed through larger boats that had started ahead of her, ULDB class B and was finishing with class A boats, of course with 4 other Hobies out on the racecourse and Captain Sluggo owing a considerable amount of time, we were definitely watching the clock.

Completing the 81-mile course in just over 6 1/2 hours with over 12-knot average boat speed –  not bad for a 1982 33 foot boat, definitely a Hobie day, I’m sure Hobie Alter(boat designer) was smiling all day long. Special thanks to the crew on the Captain Sluggo. – Rick Yabsley.

It is worth noting that this very special little rocket ship is on the market, and at an excellent price. Want a close-up of it, then you have to check out this video! – ed.