knocked over in 15 true? 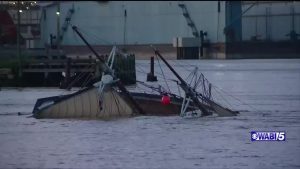 On Friday evening, local first responders rescued 18 people from a historic schooner that capsized near the town of Bath, Maine.

That evening, Coast Guard Sector Northern New England watchstanders received a report that the historic schooner Mary E had capsized near Doubling Point with 18 people onboard. The Bath Fire Department, security boats from Bath Iron Works, good samaritans and a Sea Tow response boat arrived on the scene and rescued all 18 people from the water. Two were sent to a nearby hospital in Brunswick, according to the Press Herald.

The Coast Guard dispatched a Station Boothbay Harbor boat crew to assist. Working together, responders and the schooner’s crew managed to stabilize the Mary E before she fully sank. Read on.

no mon, no fun