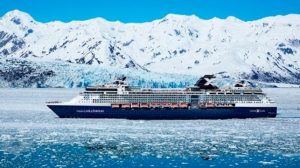 Oh for christ’s sake – who in the hell thought letting cruise ships operate again would be a good idea??

Cruise ships are reporting their first cases of COVID-19 in Alaska shortly after the large ships resumed sailing to the state. Officials are saying while they never expected the cruise season to be COVID-free they are pleased that the protocols seem to be working limiting the scope of the outbreak and potential exposure to the residents of the state.

Shortly after departing on its first cruise of the Alaska season, the Celebrity Cruises ship the Celebrity Millennium reported a positive test for COVID-19 among one of the passengers aboard the ship. The cruise ship had departed Seattle on July 23 and according to the cruise line, all passengers and crew are vaccinated for the virus. Alaska’s public media outlet KTOO reports that a passenger began to experience flu-like symptoms and was isolated and tested aboard the cruise ship. Read on.