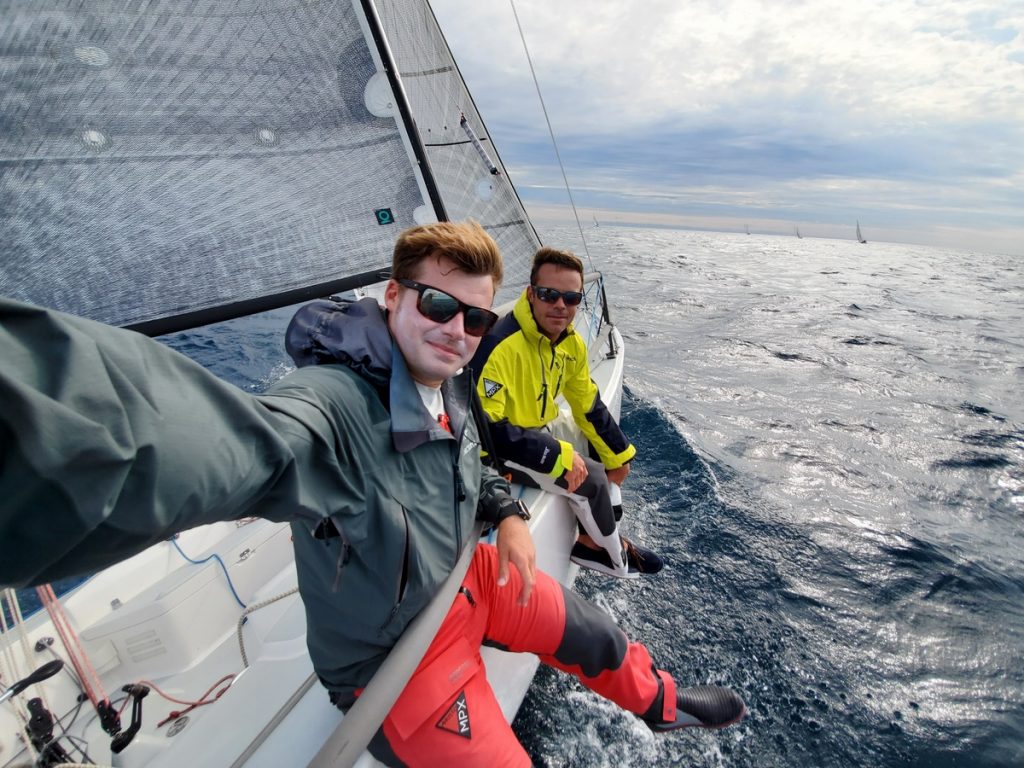 A fast start and series of right moves along the 289-nautical mile course propelled Andy Graff and Scott Eisenhardt to first place in the four-boat field of the doublehanded division in the 112th Chicago Mac race.

Leaving at 11 a.m. Saturday, July 17, Andy and Scott moved east of the rhumb line taking advantage of steady 15-17 knot winds out of the north with rolling three-four-foot seas. At 2 a.m., it shifted northeast and they tacked northwest 15 miles offshore from Holland, Mich.

“We got a lift and we tacked over to starboard,” said Graff. “Sunday morning the wind curved up northwest, then north and got lighter.”

The duo adjusted. “We went to a code zero reacher which gave us more sail,” said Graff. “We were parallel to the Michigan coast about 15 miles off Pentwater.”

Catching a breeze midday Sunday pushed them past Sable Point.

“We were about 15-20 miles offshore from Point Betsie,” said Eisenhardt, who says they caught a couple hours of sleep early Sunday morning. “We were outside the thermals. We picked up a sea breeze from the northwest and rode that all afternoon past Point Betsie doing three to seven knots. We went outside the Manitou Islands. Sunday night it was zero-two knots for two hours. It would fill in and then drop multiple times.”

Sunday was his 27th birthday. The middle of Lake Michigan was an ideal spot to celebrate. “I fired up the boiler and heated up Pad Thai and made a Manhattan and Andy had chilli,” said Eisenhardt. “There’s nowhere else I’d rather to have been.”

Getting past the South Fox Lighthouse, they caught western winds that turned southwest. “We stayed offshore,” said Eisenhardt. “We got to Grays Reef about 6 p.m. Monday. The wind picked up, we turned the corner at the shoal marker and it was straight downwind. After the Mackinac Bridge, we had four jibes. We put up the A2 spinnaker and hauled ass straight downwind through The Straits. It was 12-18 southwest and we hit 11 knots on a broad reach.

Crossing the finish line at 11:30 p.m., it was time to celebrate. They went to the Pink Pony and had drinks with friends before going to sleep at 5 a.m. Tuesday! – Seth Schwartz

don’t fuck with a falcon