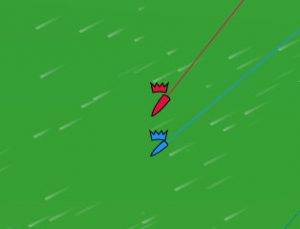 West Coast sailors are familiar with the TP 52 Badpak,  a moderately successful early example of the failed Pac 52 class. That boat was sold, making way for a new Badpak, a Botin 56 that was thought to be a TP 52 “killer”.  Like all these boats, stacked with the best sailors money can buy, they embarked on this year’s Transpac.

The “old” Badpak became Warrior Won, and has so far put up better results under new ownership. That brings us to today’s snapshot of Warrior Won (in blue) ahead of Badpak (in red) on both corrected and elapsed time, with about 1,000 miles to go.

Now we know shit changes all the time out there, and perhaps this result will not stand, but damn, that’s gotta hurt. We imagine there is at least one really grumpy dude on BP who ain’t much fun to be around right about now… It is worth noting that they are both currently winning their class…

the eyes have it

next year in cuba