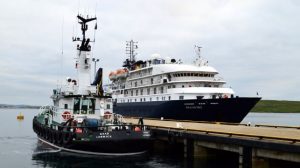 Scotland reopened its ports to cruise ships starting today, six weeks after the U.K. permitted domestic cruises to restart for residents. The move came the same day as England celebrated what was being called “freedom day,” as pandemic-related restrictions and the requirements for face coverings and social distancing were ended.

Six weeks ago, Scotland had refused to go along with England when cruise ships were permitted to resume voyages carrying U.K. residents under restrictions on trips to sea or visiting the country’s domestic ports. At the time, the Scottish government highlighted that it said it would make its policy decisions to coincide with the restart and it would be based on the health status and overall level of precautions across Scotland. While many parts of the region had their restrictions at low levels by the beginning of June, the country overall remained at level two with the government saying it would have to reach level one or zero for cruises to resume. Scotland moved to level zero as of July 19. Read on.