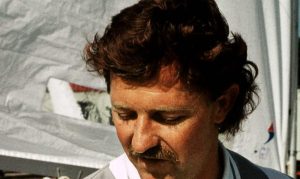 Larry Lemieux never climbed an Olympic podium during his sailing career, but he does possess, arguably, the rarest Olympic award there is: the Pierre de Coubertin medal.

Only 17 athletes have ever been awarded the medal, which is given by the International Olympic Committee (IOC) to recognize those who demonstrate the spirit of sportsmanship in the Olympic Games.

Each of those 17 medals were awarded under vastly different circumstances, but one in particular resulted from dramatic moments that could rival any gold-medal victory.

This is the story of one Canadian sailor’s heroism in the heat of competition at the 1988 Games. Read on.

Tip of the hat to anarchist James.

may i be blunt?