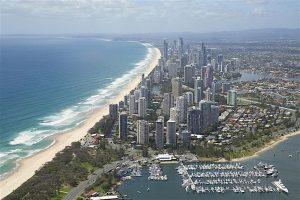 Yet again, the dreaded Coronavirus threatens to disrupt offshore racing in Australia.

It is becoming increasingly doubtful whether the Sydney-Gold Coast Race, an annual 384nm sprint North from Sydney to a finishing line off Main Beach at Southport (above), will start as scheduled on July 31.

A recent sudden spike of COVID cases in and around Sydney has prompted the New South Wales state government to impose tough restrictions on travel and social gatherings. These include a limit of two people for any exercise activity and a prohibition on traveling further than 10 kilometers from home for anything other than work or essential purposes.

A further complication is that the finishing line, and the host club for arriving competitors, are at Southport on the Gold Coast, just a few miles North of the state border between New South Wales and Queensland. The state of Queensland will probably close its border to NSW as part of a strict virus-containment policy.

The race was canceled last year because of COVID, as was the Sydney-Hobart in December. Both events are organized by the Cruising Yacht Club of Australia. While cautious government action has certainly held down local infection rates, East Coast offshore sailors have now had no substantial event to contest for almost two years.

The ‘Southport’ is always popular because it serves as a feeder race for yachts wishing to then press further up the coast for the Airlie Beach and Hamilton Island regattas in the splendid – and warm – yachting waters of the Whitsundays. The current entry list includes 80 yachts ranging from the Southern Wind 96’ Ammonite and RP 69 Moneypenny to nine TP52s and a cluster of eight boats entered in the new two-handed division.

One alternative being considered as a way to sidestep the closed border with Queensland is to make the race a round trip to South Solitary Island and return.

That small island is just off the NSW North Coast near Coffs Harbour, a well-protected safe refuge in the event of extreme weather.

This is likely to make the total distance sailed of the proposed course slightly longer than the 628nm Sydney-Hobart. In the eyes of many offshore veterans an ‘out-and-back’ race rather than straight-line passage might also be a fairer test of tactics and skill, and reduce some of the advantages enjoyed by the larger boats when the race becomes a downhill blast.

No doubt the ‘South Solitary Option’ will be considered at the CYCA Annual General Meeting this Tuesday evening. As a reminder of how much COVID has changed our lives that meeting will be held not at the club itself (which is closed) but via Zoom.

Ed’s title inspiration thanks to PE.