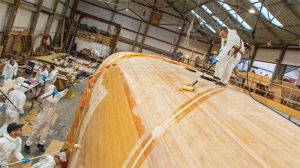 From the humblest garage build to the fastest maxi racer the Gougeon Brothers re-wrote the script when it came to modern boatbuilding.

Faster, Higher, Tougher, Stronger is best known as the motto of Olympic achievement but it could equally apply to the spirit of innovation that the founding Gougeon brothers brought to the West System brand which endures more than half a century later.

Dave Johnson, sales director of Wessex Resins and Adhesives, licensed manufacturers of West System products within Europe, has seen an explosion of that pioneering spirit over the past year. ‘It’s wonderful to see our products being used across such a diverse range of waterborne craft, from standup paddleboards to some of the AC75s in the recent America’s Cup. Read on.