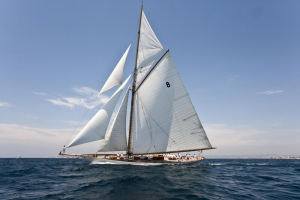 MOONBEAM IV is the fourth and largest in the Moonbeam series designed by the famous Scottish architect William Fife III. Built in 1914 for Charles Plumptre Johnson, son of Queen Victoria’s physician, the classic yacht did not enter service until 1920, after World War I was over. It is from this date that he will wear his legendary number, 8. MOONBEAM IV then distinguished himself by winning the King’s Cup at Cowes in 1920 and 1923.

In 1950, Prince Rainier of Monaco acquired the auric cutter, renamed it Deo Juvante and spent his honeymoon there with Grace Kelly. In the 1960s, the classic yacht was bought by the fairy tale Hannibal Scotti who gave it back its original name, but used it to charter goods.

MOONBEAM IV was found in 1995 in the Aegean Sea, transformed into a charter boat. Badly treated, it is transformed, in particular into a ketch (2 masts) and has lost its splendor. A few years later, she was taken to Burma for a complete refit. It came out completely renovated in 2001.

In 2016, MOONBEAM IV made its comeback on the classic circuit and once again distinguished itself in the “Great Traditions” category: victory at the Voiles de St-Tropez, Voiles d’Antibes, Régates Royales de Cannes, …

Richard Mille acquired this legendary classic yacht, chose to have it fly the French flag, and chose Brest as his home port, where he joined MARIQUITA, the classic yacht bought by his friend Benoît Couturier. The objective displayed by Richard Mille is the same as that of Benoît Couturier: to recreate a dynamic and a circuit for classic yachts in the Atlantic and the English Channel, ultimately not very far from the region where they were born, Scotland.

The first sporting objective for MOONBEAM IV: the Fife Regatta 2022 in Fairlie, Scotland.

Benoît Couturier, owner of MARIQUITA, upon the arrival of MOONBEAM IV in Brest: “For me, this makes it possible to set up a viable economic plan to sail such boats and maintain them by pooling costs and sporting experience. Our program is taking shape, it is really in line with what we want to do. Our goal was to concentrate several boats of the same generation and of the same type as MARIQUITA in Brest to allow us to train, to continue to increase in power, and to be able, in the future, to organize events bringing together this type of boat. In fact, it is the realization of my initial project, it is in the logic of things! “

the adventures of boo boo