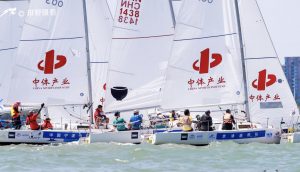 The Notice of Race for the 17th China Club Challenge Match (Club Cup) went out last week. The event has 30 J-80s arranged for charter – they have all already been taken – in less than a week.

In addition, competitors may bring their own J-80’s to the event in Xiamen with an expectation of a fleet on the high side of 40 making it, for the 4th year in succession, the largest one-design keelboat regatta in Asia.

Over the years it has gradually grown, largely because things were done right. From early on the event was ‘dual format’ with the first few days of racing being fleet racing with the top teams qualifying for match racing with round robins followed by semis and finals. The winner of the final gains the right to race against the previous year’s champion, hence the ‘Challenge’ in the event title. I did have a rather wry smile when I read of one or two events having fleet qualifiers leading to match racing and being declared as imaginative when the Club Cup had, at the time, been using the format for years.

As the fleet grew in size, experience and ability foreign sailors with good rules knowledge were drafted in to keep things ‘honest’ and that has served in many ways to enhance the event’s reputation and popularity.

In fact for the last half dozen years or so the judge & umpire team has been led by two Kiwi IU/IJ’s with 5 America’s between them backed up by other umpires of similar status.

Last year, of course, the international officials couldn’t enter China so rather than dilute the event’s reputation the match racing element was set aside.

It was quite amusing to read the WMRT comments when their finals were announced as being in China that “it is an exciting opportunity for us to promote and develop match racing in China including at regional and local levels”. I am sure they could help but China has had a match racing event officiated by top-level officials since 2015 and teams don’t pitch up for the Club Cup as it is often known not having practiced at ‘local or regional levels.

In fact, one race in the final 2 or 3 years back led one IU to state – as the boats crossed the like 10cms apart – “that was in the top 10 races I have ever witnessed, and he’s seen thousands.

No moaning about the death of sailing here in the PRC, more and more are getting into our sport and the CCCM is proof that when things are done right, Chinese sailors want to be part of the action.

The event isn’t until October but hopefully I will be able to provide full race and event reports as they happen.

See ya on the water
SS

rocking the wrong way seems to be the right way