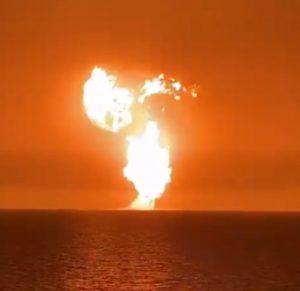 Residents of Baku, Azerbaijan were treated to an astonishing sight on Sunday night when a mud volcano sent a geyser of fire skyward about 45 nm to the south.

Unlike the cauldron of fire that erupted next to a gas platform in the Gulf of Mexico on Friday, Sunday’s explosion in the Caspian Sea appears to be natural in origin. Azerbaijan’s Republican Seismological Service Center said that the towering jet of flame was the product of a mud volcano explosion, one of many in the region’s history.

The State Oil Company of the Azerbaijan Republic (SOCAR) said in a statement that none of its offshore installations were harmed.

Dr. Mark Tingay, a petroleum geomechanics specialist at the University of Adelaide, said in a Twitter post that the position of the fire could correspond to the site of the Makarov Bank mud volcano, which had a very similar explosion in 1958. Azerbaijan has roughly half the world’s supply of mud volcanos, with hundreds of identified sites both onshore and offshore. These features typically correlate with the presence of subsurface oil and gas deposits.

Mud volcanoes have two possible origins, according to Tingay: geothermal heat, like the examples at Yellowstone; or high pressure in sedimentary rock far below the surface, as in Azerbaijan. The effluent typically includes substantial quantities of methane (natural gas), which means that an eruption may be accompanied by large fireballs. Read on.