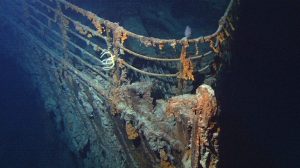 Who doesn’t love a good story, especially one about amazing discoveries in Earth’s farthest reaches? Oceanographer, Navy veteran and explorer Robert D. Ballard has written a memoir, “Into the Deep,” that recounts many of his dramatic discoveries, including locating the wreck of the luxury ocean liner Titanic in 1985.

Ballard, now 79, is known for designing and using many types of vehicles for underwater exploration. His most important scientific contributions include mapping regions of the mid-Atlantic Ridge, an underwater mountain chain that runs north-south through the Atlantic ocean, and locating hydrothermal vents in the eastern Pacific. These underwater hot springs form at cracks in the ocean’s crust, where superheated water jets upward from Earth’s interior. Finding them changed scientists’ thinking about the evolution of life on Earth and the chemistry of the ocean. Read on.