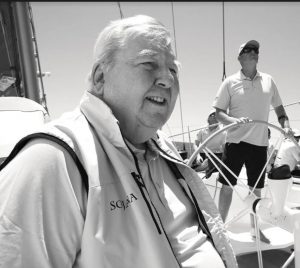 Sir Peter Harrison left school at 16 and qualified as a chartered accountant eventually working for Crest Nicholson. He went on to acquire Chernikeeff from Crest Nicholson and built it into the largest privately held computer networking company in the UK before selling his shares in 2000.

Sailing was always a passion from his first experience on the Norfolk Broads through the Scouts at 15 and his yacht Chernikeeff 2 could often be seen racing on the Solent.

In 2003 he sponsored and led the GBR America’s Cup Challenge and therefore had a significant impact on the career of a number of the UK’s top sailors.

Clearly not a selfish man, in 1999 he founded the Peter Harrison Foundation followed by a significant endowment. This foundation to date has made grants of around GBP50m, primarily towards assisting the self-development of younger people.

In the sailing world Sir Peter was lately perhaps best known through his luxury, but hard raced, 35m ketch Sojana (named after his three grandchildren), particularly on the Caribbean Circuit. His philanthropic work clearly continued there as his UK Commander of the British Empire was joined by the ‘Knight Grand Cross’ of Antigua & Barbuda.

In a recent interview he reckoned he had been fortunate to have an “exciting and sophisticated life”. He was 82