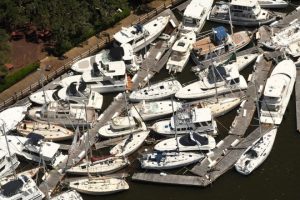 Getting hit by Hurricane Isaias was bad enough for boat owners moored at the Southport Marina, with more than 100 boats damaged and nowhere to store their vessels, but the owners received notices from the marina that they would be responsible for paying for damages to the docks. It was like salt on a wound, according to one owner.

With bills ranging from around $8,000 to more than $20,000, the marina is expecting boat owners to pay for the damages incurred to the docks, which was in the millions. But boat owners’ insurance companies are pushing back and have filed a federal lawsuit against Southport Marina.

The lawsuit, filed on behalf of more than 100 boat owners, claims that the marina’s arguments don’t hold water and that the docks were not maintained properly, causing boat owners thousands in damages themselves.

“Evidently eager to find a source of money to fund the cost of rebuilding its own uninsured and badly compromised failed dock system—and despite the failure of that system’s piers and docks causing well over a million dollars in damage to the boats that had been moored at the Marina at the time of the Storm—by early 2021 the Marina had determined to blame its own customers (the owners of the very same boats its failed piers and docks had damaged) for the failure of its piers and docks,” according to the lawsuit.

what’s in a name