the name of the game 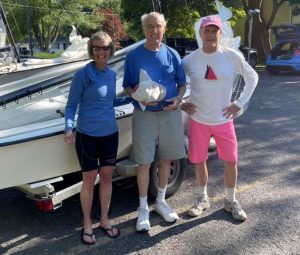 When the pandemic hit last year, the Lightning fleet at the Buffalo Canoe Club  was displaced from their home, because the club isn’t in Buffalo, it’s located in Point Abino, Ontario.  The border closed so the American members couldn’t go sail in the magical waters of Abino Bay.

A solution was found when Sandy Beach YC, which is located one mile south of Niagara Falls on the Niagara River, opened their doors to the displaced Lightning sailors and offered their club and Race Committee to the fleet. The US-Canadian border remains closed and so the scenario is being repeated this summer.

While the fleet of 11 boats is smaller by more than half than most summers at the BCC, because some boats and sailors are stuck in Canada, it remains ultra competitive.  There are several World and North American and champs like David Starck and his wife, Rolex Yachtswoman of the Year Jody Starck, excellent just post-college sailors like Connor Godfrey and Katherine Moloney, along with multiple rising young sailors who get the benefit of sailing against world-class competition. Even the outstanding RC is staffed by Chair Fritz Dusel, who was a crew on a Lightning North American Championship boat, and markset Paul Grenauer who won a J22 Worlds as crew. Talent abounds everywhere on the course.

But perhaps one of the most notable sailors in the fleet is 81 year old Ed Roseberry, otherwise known as “The Berry”, who has been part of the Lightning Class for 67 years.  I’ve known Ed since I was a little kid and sailed with him on and off over the years. Fate put us together again this evening along with Monica Jones, who has won her share of regattas.  While we didn’t win a race, we were plenty competitive and most importantly had an awesome time.

What other sport is there where organizations just open the doors freely so those who are displaced can still play the game?  What other sport is there where kids four-times younger than the oldest competitor, world and north American champs, a Rolex Yachtswoman of the year and an 81-year-old dude can mix it up in competition, with no one having a clear edge, and all of whom support and learn from each other?

The pandemic has sucked in so many ways, but in others, it has helped to highlight the fundamental goodness of the sailing community.  Isn’t this the real reason the vast majority of us – whether 18 or 81 years old – play this game?  I know it’s why I do. Title thanks to the Crystal Method.