Here’s your trophy…now we want it back 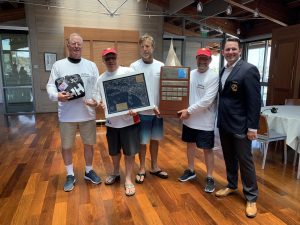 As we said here earlier, the 2021 SoCal 300 was a light-air mess: 22 out of 33 boats dropped out, with only the most determined remaining.

Of those, the modded Hobie 33 Captain Sluggo owned by  SoCal OG Rick Yabsley, was awarded first in class, and first overall, a very impressive win. Here is Rick along with crew Jeffrey Barteet, Gary Burke and Brian Zimmerman getting the first overall perpetual trophy at SDYC.

But while putting the 33 away, they were approached by Race Director Jeff Johnson  who informed them that there had been a mistake – they didn’t win first overall, and could they have the trophy back?!!

The Captain Sluggo team was like, WTF??  As we understand it, the last remaining boat on the course, the Cal 40 Nalu IV, had not yet finished when the awards were handed out, but when they did, some 8 hours after Sluggo, they were determined to have won overall, not Sluggo. Said Johnson:  “Mea Culpa. I didn’t calculate the amount of time Nalu could spend on the course and not be first before getting the delayed awards ceremony done. I’m terrible at math.”

We totally understand that mistakes do happen, but SDYC should have known not to award overall with a boat still to finish, and you can see why. Team Sluggo was super bummed – who wouldn’t be??

As it turns out, under ORR (time on time), Sluggo owed the 40 nearly 9 hours on corrected time, which seems like a hell of a lot of time.  It is worth noting that the longer the race takes, the more it favors slower boats, and this was a very slow race.

Under PHRF (time on distance), the time owed would have been more like 6 hours.  We aren’t judging (yes we are), and full props to Nalu for the win, but Cal 40’s aren’t exactly light air rockets. Seems a bit weird for them to get the win, but again, full respect for them getting it done under the variations of ORR.

Perhaps a Hobbie 33 beating a TP 52, and in turn getting beat by a Cal 40 is poetic justice?