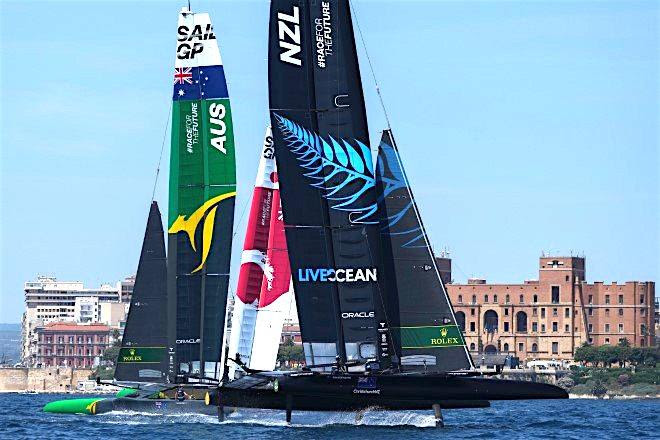 We all remember, as kids, that rush of disappointment when our favourite firework refused to ignite. The blue touch-paper was lit, we stood well back in delighted anticipation, and then…. nothing. A complete fizzer.

There was much the same feeling about Round 2 of the SailGP, just concluded off Taranto. Despite some moments of good, close racing the event somehow lacked the spark of genuine, sustained excitement.

SailGP seems to be the unlucky victim of its own hype. Their slick promotional build-up always promises us a weekend of spectacular, hi-tech racing between the world’s best sailors. What we have had, so far, in this COVID-interrupted second season has been, well, a bit of a fizzer.

In the preceding round in Bermuda the first day of racing was brought forward to the Friday to ensure some wind. The host broadcast television coverage was taped, and the networks then initially tried to pretend their replays in the scheduled Saturday timeslots were ‘live’. That deception was quickly uncovered.

The SailGP race management team was so worried the F50 cats wouldn’t get up onto their foils for the first scheduled day of racing that they reduced the crews to just skipper+2. These boats aren’t designed for short-handed sailing. The three-man teams did an outstanding job, but changing the format in such a drastic way was disruptive, and smacked of desperation.

The boat in Australian livery skippered by Tom Slingsby had hydraulic problems on Day 1 and spluttered around the course like an old Dodge pickup firing on three cylinders. So much for SailGP’s “Powered by Nature” slogan.

Indeed, it is the extreme fragility of the F50s and their dependence on non-human power that makes it so difficult for fans of conventional sailing to relate to this extreme event.

That emphasis on technology – and the risks it entails – was underlined in Race 3 when the broadcasters lost their helicopter camera coverage. The commentators were reduced to making on-the-fly guesses as to which boat was leading. Without Stan Honey’s brilliant ‘live’ computer graphics grid superimposed over a high overview sailboat racing at this speed on television becomes close to unintelligible, especially on a narrow course.

In the final race, when the US boat had a comfortable lead with just two legs to sail, one of its carbon rudders was damaged or broken, presumably after hitting a submerged object. The boat stopped dead in the water and the event was robbed of its proper result.

Bad luck can strike anywhere, but there is a more fundamental issue in SailGP’s  hyped-up charade of international competition.

In Taranto we had an Australian steering the US boat, another Australian steering for Japan, Phil Robertson (a New Zealander) driving for Spain, and Arnaud Psarofaghis (a Swiss) at the helm of the NZ boat. This type of professional sailing has now eroded whatever was left of national pride and allegiances in the sport.

Yet the breathless media release from Sail GP at the conclusion of the series still tried to beat the nationalist drum. It trumpeted Japan’s win as “a home victory for Italian sailor Francesco Bruni” despite Bruni himself not even being on the F50 for the final race (he’d been offloaded onto the chase boat when the crew was reduced to three.)

The continued commitment of SailGP to their event is admirable. The cost in time, effort and dollars must be huge. But it is difficult to escape the suspicion that as this series grinds on for another nine months, over six venues, they might eventually come to the realization that they could be flogging a dead seahorse.