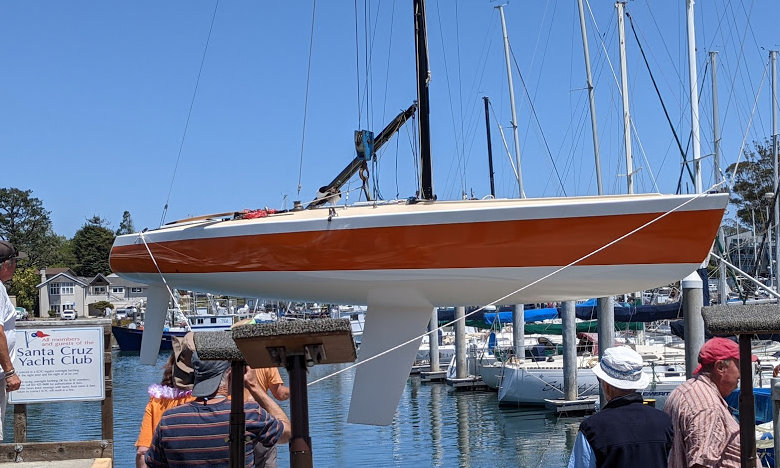 From our Fabulous Forums, brought to you by Marlow Ropes

Yesterday at the Santa Cruz Harbor hoist, a gathering of the Tribe celebrated the Pi-24 NELLYBELLE’s relaunch after Alan Wirtanen and Melanie Kett rescued her from sure demise in a Texas junkyard.  Alan had built NELLY in 1971 to a design by Steve Fennell called PI. PI was fast, but her 250 pound keel was too light, and she capsized and turtled in a gale in the Santa Barbara Race, June 27-28, 1975 off the Big Sur Coast with the loss of the Fennell brothers.

NELLYBELLE’s only other surviving sister is LOOSE.  Alan has deepened NELLY’s keel to a design by Larry Tuttle and increased its weight to 750 pounds.  As well, the rig has been shortened slightly so Moore-24 sails fit.

Shortly after NELLYBELLE’s christening and relaunch, Alan and crew of Morgan, Mario, and Dennis set sail and flew the spinnaker off the dock.  Welcome home, NELLYBELLE!

Jump in the thread!

run through the money