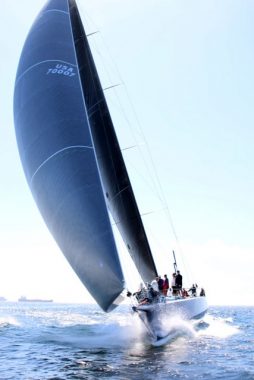 Leading into this summer’s Transpac race, Roy P. Disney’s modified Volvo 70 Pyewacket 70 has been absolutely killing it this spring in the waters off of Southern California and the Baja Peninsula. While a turboed Volvo 70 being first to finish a yacht race isn’t necessarily impressive, what is impressive is the team’s ability to consistently correct out well against some very good competition.

With a solid result in the Islands Race, an overall victory and course record in the Cabo Race, and missing out on a division win in the recent Ensenada Race by just a handful of minutes, the team and the boat are clearly firing on all cylinders.

With Transpac just around the corner, we wanted to take the opportunity to check in with Pyewacket 70 crewmember and sailmaker Brian Janney, manager of North Sails in San Diego, to learn more about the team’s recent efforts in prepping for the (hopefully) downwind blast to Hawaii.

Sailing Anarchy: First off, tell us a little bit about the Pyewacket 70 program and the new boat if you could.

Brian Janney: History-wise, the Pyewacket program started with Roy’s dad, who is Roy E. Disney. But I’m sailing with Roy P. Disney, who’s been racing for many years. The core group of guys on the program have been sailing together for over 20 years, which is kind of cool.

With this boat, I was given the opportunity to take the lead on the sail inventory which has been really fun and exciting. When we got the boat, most of the sails were in pretty good shape. The Black Jack guys (in Australia) didn’t do much sailing with the boat before they got their 100-footer. So we basically just sailed the boat for a year with what we had and as we learned the boat, we upgraded some things and changed some things and just took some evolutionary steps forward.

SA: So tell us a bit about the boat itself. I always see Pyewacket 70 listed as a ‘modified’ Volvo 70. What’s different on it? Just a taller rig and a different keel, or what?

BJ: Well, partly. Compared to a normal Volvo 70, we’ve got 3 more meters of rig. So where our headstay ends is the normal masthead position for a Volvo 70. The keel is also both deeper and lighter. You know, the further away the weight in the bulb is, the lighter you can go and still get the same righting moment. And the bow sprit is longer too.

The Aussies did all of those modifications. They also took out the grinding pedestals in the cockpit and put the hydraulic winches in. When we got the boat, it was really nice because all of that work was already done.

SA: Quite a change from the Andrews 70, I imagine. Tell me a bit about the learning curve.

BJ: Yeah it’s a completely different type of boat, but the more that we sail it, the more that we keep learning. It’s been great this year, because we’ve had Peter Isler sailing with us and he runs a data log for the entire race, and afterwards we take our speed team and analyze all of that data to further refine our sail crossover chart and board up/ down positions. We are still learning the boat and getting faster with it, all the time.

SA: Earlier in our chat, you mentioned taking some evolutionary steps forward with the boat. What were those steps?

BJ: We added two new sails to the inventory. One was an A2 and one was an A3. The boat didn’t really have a real downwind type sail for the races that they had been doing in Australia. But being on the west coast and with the races that we are doing, which include a lot of running, we opted to build a proper A2. Quite a big sail!

With this type of boat, you basically can’t run a big spinnaker once it starts blowing over about 17 because the boat starts going too fast, the sail shape is too full, and the shape can’t keep up with the boat speed and the apparent wind shift. So the next sail that we built was an A3. That’s the sail that we used all the way to Cabo and it was great. 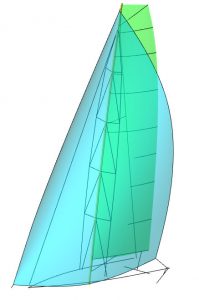 SA: So the A2 is an entirely new sail for the boat and should certainly help you run deeper in a lot of conditions, but how is the A3 a better sail than the old one? Or what in particular was that evolutionary step that you and the North Sails team took in designing and making this new one better and faster? Just a new shape, or what?

BJ: With these modern flying sails we’ve now got what we call Helix load-sharing sails. Some companies call them cable-less sails, but we call them Helix. And so we’ve got one of those for the A3. That’s the sail that we used all the way to Cabo and that was great. Before, when you had a furling sail that depended on a cable, you would design the sail to hang off that cable.

With the old style sails, it was hard to get tension on the cable to furl the sails, and they would always be sagging to leeward. The new style sail sits more centered or even to weather, with less load and it provides more lift. So there’s also more of a fast, bow-up attitude. The sail is lifting the bow up out of the waves more rather than pushing it down into the water, so it’s just a much more efficient and faster sail. The interesting thing here is that it’s not just taking away the cable that’s important, it’s a full change in how you design the sail. So it’s more than just the load sharing on the sail, it’s an entirely different design.

We have a load cell on the end of our bowsprit and we would sail the old A3 with 10 tons of load. With the new Helix sail, because it doesn’t depend on the cable, we are at 6 tons of load, so that’s a pretty big load reduction just because of a different style sail, and a new sail technology. We can only put 12 tons of load on the mast; that’s adding up the spinnaker tack point, stay sails, and everything else. All of those loads together have to be less than 12 tons. On these big boats, the load-sharing sails mean that things can get lighter, and it just relaxes the whole boat and makes it perform better.

Other companies are doing the same principal, but we are lucky with our 3di technology that we think we have a better solution on how to do it. With other companies, you’ll see like a panel that goes vertically up the luff of the sails and that’s because they’re trying to get the fibers to go straight up the luff. With the 3di, we are able to put more tapes up the luff to take more of the load.

SA: Very cool to track this progress that’s being made on Grand Prix offshore racing yachts. What is the trickle-down effect for this technology? How does it apply to the every-man and do they have an application for the masses?

BJ: We are doing a cruising version of the Helix load-sharing sails, which is pretty cool. More and more cruisers and club racers are requesting furling spinnakers. When you have a spinnaker or gennaker greater than 60% mid-girth or so, it’s a lot safer to do top down furling, so that’s where the cable starts rotating. The tack stays in place and the furl starts at the head. It sucks up the leech and the middle, deeper part of the sail.

In the past, cruisers and racers that wanted to furl their spinnaker wanted to have the cable be exterior of the luff. The spinnaker is separate from the cable when it’s unfurled. With this helix gennaker, we can put the cable inside the luff which makes furling so much more simple.

If the breeze comes up all of a sudden, and you weren’t ready for it… if you know you can furl the sail easily every time, you’re far more likely to use it. If you don’t have confidence in your sail handling for whatever reason, you’re probably not going to fly it as often. If it’s complicated or hard to use, they’re probably not going to use it, and that’s where the new Helix load-sharing sails come in; they’re easier to furl quickly and easier to use.

SA: Very interesting chat Brian, thanks for that! And best of luck in Transpac!

BJ: My pleasure. Tell Scot to get to work!

Contact [email protected] in San Diego if you have any sail making needs.