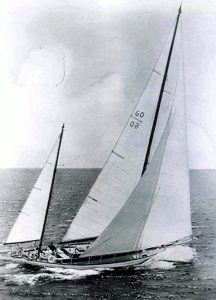 In the 50’s, San Diego had the strongest fleet of ocean racing boats, skippers and crews on the West Coast.  On any given weekend, or down the coast of Mexico, the front row was usually occupied by the 54′ yawl EVENING STAR (Gene Trepte), the 8 meter PRELUDE, the 50′ Q Boat COTTON BLOSSOM II (Ed and Gloria Turner), the ever-changing BONGO, Ash Bown’s 40′ Owen’s cutter CAROUSEL and Star Class World’s champ Gerry Driscoll sailing his beautiful and fast S&S 39 NOVA.

Shelter Island was still sand dunes and Lowell North had not yet converted a flag shop into a small sail loft.

Ash Bown was Dennis Conner’s mentor and as a 21 year old kid Conner crewed on Bown’s “Car You Sell” in his first long distance race.  Ash Bown  recounted that “during the 1575 mile Acapulco Race kid Conner drove World Star champ Malin Burnham nuts by looking out the fore peak hatch of CAROUSEL when off watch and calling the spinnaker trim aft.  He’d tell Malin he was sailing too high or too low,  Malin would say, ‘Shut your goddam mouth.’

Half a minute later Dennis would suggest maybe easing the spinnaker a little, and Malin would tell him to shut up again. We won the race by five hours,” Bown concluded.