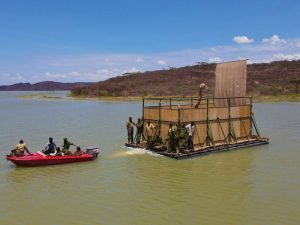 GOOD NEWS: Over the past 15 months, rangers in Kenya rescued nine giraffes stranded on a rapidly shrinking island. The piece of land on which the Rothschild’s giraffes were living had been cut off from the mainland after the lake’s water levels raised last year.

Conservationists said that the giraffes — eight females and one male — were in peril because food was scarce on the island. Rangers had been transporting food for the animals for some time but ultimately decided that it would be better to relocate them. The giraffes were transported on a barge dubbed the “GiRaft,” which consists of a tall wooden enclosure built atop 60 empty drums. The last two, a mother and her calf, were taken to a sanctuary in the mainland earlier this month. Read on.