This is actually a really compelling story… 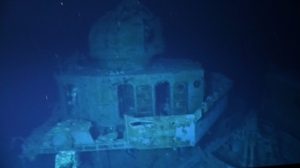 A privately-funded expedition has explored the main wreck site of the storied destroyer USS Johnston, the deepest known shipwreck in the world at about 21,000 feet under the sea.

The funder of the expedition, Victor Vescovo, is a former US Navy commancder who piloted his submersible, DSV Limiting Factor, to the wreck in two separate eight-hour dives. According to expedition operator Caladan Oceanic, they were the deepest wreck dives (manned or unmanned) in history.

The USS Johnston was a U.S. Navy Fletcher-class destroyer that sank in the Battle off Samar on October 25, 1944. Armed with nothing more than her torpedoes and five-inch guns, Johnston played a key role in defending a flotilla of escort carriers from a vastly superior force of Japanese cruisers and battleships, led by the flagship “super-battleship” Yamato.

The massive Japanese force lost three heavy cruisers in the engagement against the lightly-armed U.S. Navy task force. Vice Admiral Takeo Kurita – fooled by the ferocity of the Americans’ rearguard action – withdrew and returned to Japan. The battle marked the end of the Imperial Japanese surface fleet’s capability as an effective fighting force for the remainder of the war. Read on.