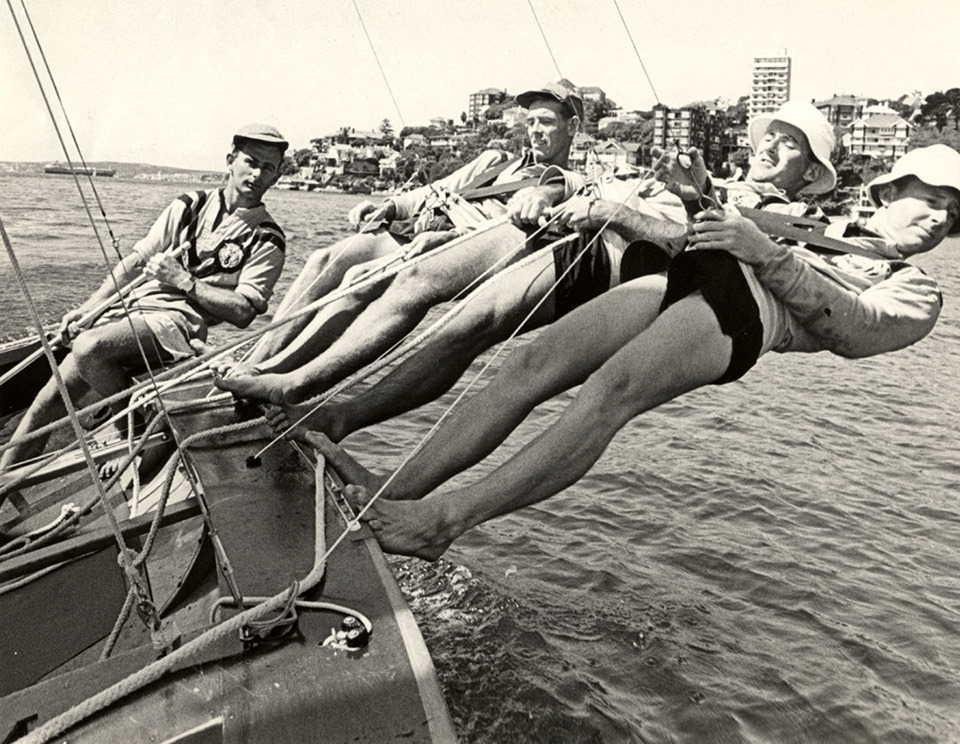 After competing for several seasons in the 16 footers, at the Middle Harbour club, Bob joined the 18ft skiff ranks in the 1964-1965 season and immediately had success when he won both the 1964-1965 NSW and Australian Championships, on Sydney Harbour, as well as the 1965 JJ Giltinan world Championship, in Auckland NZ, with his team of Hugh Cooke, Bob Sheridan and Bob Hagley.

At the 1965 JJs, Holmes and his crew sailed superbly and were clearly the outstanding team in the contest. The skiff won four of the five races and, but for gear failure in Race 3, would have won all five. In Race 3, the team held a clear early lead before the skiff’s jib carried away. After losing several placings in the fleet, the crew made makeshift repairs and came back to finish second behind New Zealand’s champion Miss IGA.

It was a remarkable beginning to a great career.

The story of Bob’s rookie season was just as remarkable off the water as it was during the victories on the water. Ken Beashel, who was the son of the long-time League Secretary Alf Beashel, was a very successful designer, builder and competitor in the 16 footers, and won the Australian 16 Footer Championship in 1961-1962.

His success in the 16s naturally drew offers to join the 18ft Skiff fleet at the League. Ken preferred the 16s and, although reluctant at first, he finally accepted an offer to sail the Len Heffernan-built Schemer and won the 1963 JJ Giltinan world 18ft Skiff Championship in Auckland.

Despite the victory, Beashel returned to the 16s and had to be persuaded by Schemer’s owner, Benny Walsh, to contest the 1964 championship. This was only temporary and Walsh had to look elsewhere for a crew in 1964-1965. Bob Holmes and his 16 footer crew took over the skiff and won the 1964-1965 Australian Championship as Schemer.

At the same time, Alan Greenway, who was the Chairman and Managing Director of TraveLodge, saw the potential of Schemer and decided to sponsor Holmes and his team. The association was an instant success and lasted until Bob Holmes retired in 1974, after winning five JJ Giltinan world championships for Travelodge.

When Bob Holmes successfully defended the JJ Giltinan world Championship title on the Brisbane River in 1966, he became the first Australian to become a two-time winner, but this time he had a hard fight on his hands against two other Australians Len Heffernan (Apex) and Bill Jones (Gold Thimble). Apex was actually the only two-race winner in the regatta but a retirement from Race two was costly as only 4.16 points separating Holmes and Heffernan in the final result.

Bob Holmes had to wait three years before he won his third JJs title. It was again on the Brisbane River and this time was even closer than the 1966 victory and required a sail-off between Travelodge and Willie B (Rod Zemanek) to determine the winner.

The special match race attracted a large crowd, which actually stopped the traffic on the main road along the river, and was gripping as the pair were separated by just a few seconds around the entire course. At the finish, Travelodge took the honours by 26s, giving Bob Holmes his third JJ Giltinan win.

Following that epic race on the Brisbane River, the Travelodge skiff was shipped to Long Beach, California to compete in the California International Sea Festival against former Australian skiffs being sailed by local USA sailors.

One of those was the 1968 JJ champion Daily Telegraph, which gave Ken Beashel his second championship victory, now being sailed by George Twist. Travelodge won the regatta for Bob Holmes’ team and the Travelodge skiff was left in the US. It later became the first USA representative at the JJ Giltinan world Championship when Roger Welsh skippered her as Travelodge USA in the 1970 series on Sydney Harbour.

Incredibly, Holmes’ new Travelodge boat, built for the 1969-1970 season, failed to qualify for the four-boat team selected to represent NSW at the 1970 championship.

A pattern of the Holmes-Travelodge combination winning both the JJ Giltinan and Australian Championships every second year continued over the next three campaigns with victories in 1971 and 1973, while producing only moderate results in 1972 and 1974, which was Bob Holmes final JJs.

Bob Holmes believed that, so long as the hull was competitive, the crew was the most important part of a racing boat. Next was the sails, then the hull, spars and gear. His grand-daughter, Samantha recalled recently that he took training very seriously and, late in his 16 footer career, often stayed out after a race had finished and made his crew do an extra lap.

On one occasion before a major race, he sat on the dolphins off Steel Point watching the skiff while his crew sailed Travelodge past him several times to try and find something that would improve the team. It had to be his attention to detail, and determination for perfection, that gave Bob Holmes the edge over his opponents and allowed him to achieve the success he earned in the 18s.

Having Your Cake… From our gal pal Katie Burns…