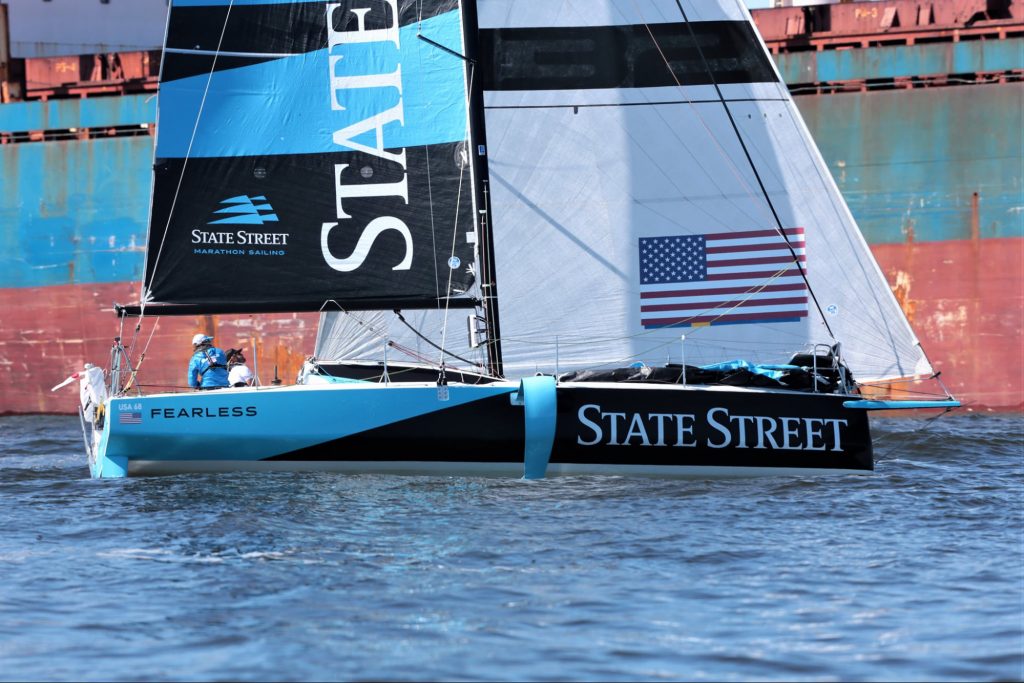 With a cloud of uncertainty still looming over the 2020 – now 2021 – Tokyo Olympic Games due to the Coronavirus, many are already looking towards the 2024 Games in Paris as the next time that the best athletes in the world can get together and compete in a safe and inclusive environment. Generally relegated to sailing small dinghies that are the recipient of little to no media coverage in the United States, the excitement surrounding the first inclusion of proper offshore keelboat racing is palpable.

Sailing roughly 10-meter keelboats up and down the coast with two adults onboard is, generally speaking, much more relatable to the average adult sailor when compared to donning a wetsuit and racing a dinghy, skiff or foiling beach cat around the harbor. Combining this upcoming revolution in Olympic sailing with the pandemic itself and other shifts in the marketplace for new boat builds, doublehanded sailing has been booming as of late, as evidenced by huge increases in participation numbers for many of the offshore classics.

While the exact boat to be sailed in the 2024 Paris Games hasn’t been chosen yet, the Beneteau Figaro 3 is clearly the benchmark for competitive one-design single and doublehanded sailing in the modern age. With a long and storied history on the wildly competitive Figaro circuit that culminates with the annual ‘Solitaire du Figaro’, the 33-foot foil-assisted monohulls boast huge numbers and consistently draw some of the best sailors on earth, largely French, to compete in their regattas.

Along with the Mini and the Class 40, the Figaro has become a stepping stone – a right of passage if you will – for any serious sailor looking to make the move into the IMOCA 60s that represent the pinnacle of singlehanded or doublehanded offshore racing. And now, a stepping stone to the Olympics as top-tier international talent is being drawn to the class.

With the 2024 Olympic Games in Paris in the not-so-distant future, we were stoked to follow the recent Solo Maitre Coq race out of Les Sables d’Olonne and see not just one one but two American flags on the tracker. Curious, we had to find out more, and so tracked down one of the skippers and reached out on a fact-finding mission.

Supported by State Street Corporation, a financial services and bank holding company headquartered in Boston and run by a CEO who actively campaigns a Cookson 50, sailors Jesse Fielding of Rhode Island and Francesca Clapcich are spending the entire season competing on the French Figaro circuit in Beneteau Figaro 3’s.

A two-time Olympian who sailed for Italy in the Laser Radial in 2012 and the 49er FX in 2016, Francesca Clapcich has also competed in the Volvo Ocean Race with Dee Caffari’s ‘Turn the Tide on Plastic’ team in the 2017-18 edition of the race.

Married to pro sailor Sally Barkow, Francesca now resides in Utah and is eligible to compete as an Olympian for the United States of America. Her teammate Jesse Fielding hails from Wickford, Rhode Island and is a graduate of Roy Disney’s 2007 ‘Morning Light’ program, and also sailed with the Oakcliff All-American Offshore Team that nabbed a podium spot in the 2011 Rolex Fastnet Race onboard their STP 65 ‘Vanquish’, among other career accolades.

Both very accomplished sailors in their own right, Jesse and Francesca’s respective debuts on the French Figaro circuit was surely a humbling experience with both sailors finishing near the tail end of the fleet. Hardly a surprise when making your debut against a fleet of top-tier professionals who have been honing their skills in the class for years.

With a full season to train in France and gain experience in the boat and to work on their race craft within the fleet, we look forward to seeing where the duo will be after this year’s Fastnet Race and when the fleet lines up for the 52nd running of the Solitaire which begins in late August. With a CEO and board of directors who is happy to support international sailing efforts, we applaud State Street on this initiative to help develop American sailing talent on the international stage. Stay tuned as we follow State Street’s efforts in 2021 and beyond, and also highlight other Americans who are shooting for the gold in 2024.  – Ronnie Simpson.