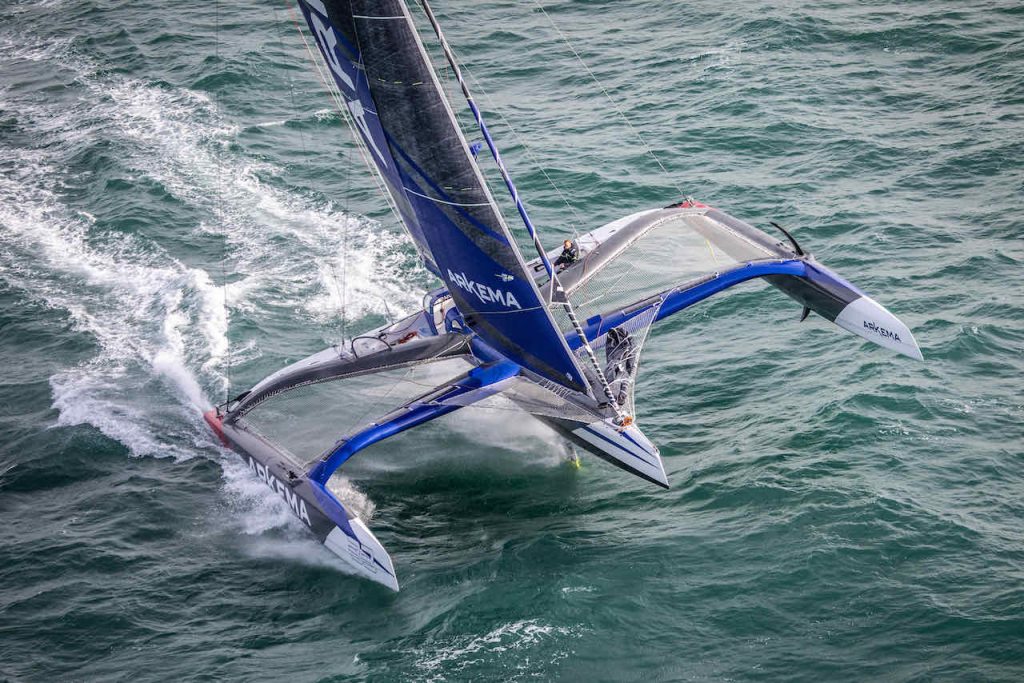 For many years the Multi 50 class of trimaran have slid somewhat under the radar, especially on this side of the pond. Dwarfed by the ORMA 60s, MOD 70s, Ultims and more, these smaller ocean racing multihulls have quietly ticked along, offering quality racing at a reasonable price to it’s stakeholders and developing into giant killers capable of more than 40 knots.

While relatively diminutive in size, the Multi 50’s are still incredibly quick, and oftentimes post elapsed times only marginally slower than their significantly larger counterparts. Evidence of this was in the last Route du Rhum, when the top Multi 50’s came in ahead of all of the IMOCAs and even before the third placed Ultims, and in the last Transat Jacques Vabre when the 50-foot trimarans again beat all of the new foiling IMOCA monohulls.

With the ORMA class and MOD class having long been broken up and the Ultims rarely getting together and in limited supply, the stakeholders of the Multi 50 class have identified a need for a top-tier, highly-promoted multihull racing circuit that could campaign all over Europe.

Re-branding the existing Multi 50 class as the ‘Ocean Fifty’ and creating a 5-stage circuit that culminates with this November’s Transat Jacques Vabre, we’re quite looking forward to the new ‘Ocean Fifty Pro Sailing Tour’. Headed up by long-time Multi 50 skipper and pro sailor Erwan le Roux, the new Pro Sailing Tour will take place off the Atlantic coast of France, in Las Palmas in Spain, and in Marseilles in the Mediterranean.

Perhaps the biggest key to the new tour’s long-term commercial viability and success is their key focus on enlisting some of the top media professionals in the game and creating a “cinema quality” video docu-series of the tour. This made-for-TV professional racing circuit aims to strike a nice balance between inshore Grand Prix sailing, high-visibility coastal racing and full-on Trans-Atlantic sailing.

With the first four races being conducted in the format of a 24-hour course of about 400 miles to be followed by several inshore courses, the fifth round of the series will be a race between Marseille and Brest in August. Finally, the series will conclude with the Trans-Atlantic Transat Jacques Vabre in November.

With crews all being mic’ed for audio and a media man always on board, with names such as Yann Riou and Martin Keruzoré already being floated for on-board media crew, we have no doubt that the overall footage will be nothing short of spectacular. Seeing that six boats are already committed to the series and a seventh boat is reportedly available for charter, we’re stoked to see this vision come to fruition come early May in Brest!  – Ronnie Simpson.

Ridiculous title thanks to Soft Cell.

gone but not forgotten

The One To Watch