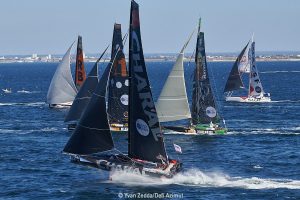 After the most exciting Vendée Globe in the event’s history, the IMOCA Class is ready for its next challenge, and this time it will be fully crewed racing in the fastest offshore monohulls on the planet in the inaugural edition of The Ocean Race Europe.

For the first time the IMOCAs will race at their full potential on a tough three-stage round-Europe ocean course, starting from Lorient in Brittany and finishing in Genoa in Italy, via stopovers at Cascais in Portugal with a third stopover in Spain expected to be announced imminently.

Each boat will be sailed by up to five crew, including at least one female sailor and a media crew. In this configuration we will see IMOCAs pushed to the very limits, 24 hours-a-day in an event which is a key part of the new IMOCA Globe Series championship.

The race starts on the last weekend in May with the opening stage from Lorient to Cascais, a challenging leg that crosses the Bay of Biscay, with up to seven IMOCAs expected to be racing alongside up to seven VO65 one-design yachts but in separate classes and with separate winners.

The Ocean Race Europe has already attracted some of the best boats and skippers in the IMOCA ranks and is sure to capture the imagination of the sailing public in another season affected by the Covid-19 pandemic.

Title thanks to Drake.

wrong, no matter how its sliced