You likely have seen this, and here is the latest from McConaghy 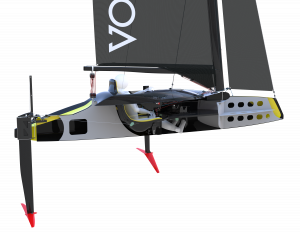 The Vortex pod racer has been specifically designed to make high-speed foiling both safe and accessible to a larger audience.

With the sailing of a Vortex pod there is no hiking, sliding around on tramps or ducking under a boom.  To fly and sail the Vortex Pod, the pilot sits inside a cockpit. The V-Pilot flies the Vortex like a plane, controlling the trim and heel (bank) with a joystick, and using foot pedals to steer.

The foils are designed to be stable at speed, allowing the V-Pilot to soar like a graceful bird or with the aggressive dynamics of a fighter jet. The Vortex’s innovatively simple control system allows the V-Pilot three-dimensional freedom while flying approximately one metre above the water at speeds of 30 knots.

Built from carbon fibre and beautifully balanced, the Vortex pod racer is lightweight, stable, and requires minimal operational effort from the pilot to get underway and air born.

The Vortex pod racer has in-built waterproof electronics to give you wind direction, wind speed, boat speed, trim, heel, and more. In time, virtual courses will be available enabling V-Pilots in multiple locations all around the world to race against each other.

The Vortex’s beam is just slightly wider than that of the average dinghy.  The foldable cross beam allows the Vortex to be stored on a trolley with the rig up, keeping setup times to a minimum, and for long-term storage or transport the crossbeam and rig can be removed.

The Vortex pod racer can be launched direct off the beach or via a ramp.  Once in the water, the rudder and forward T-foils are easily deployed and retracted from the cockpit controls.

once in a lifetime

through the looking glasses