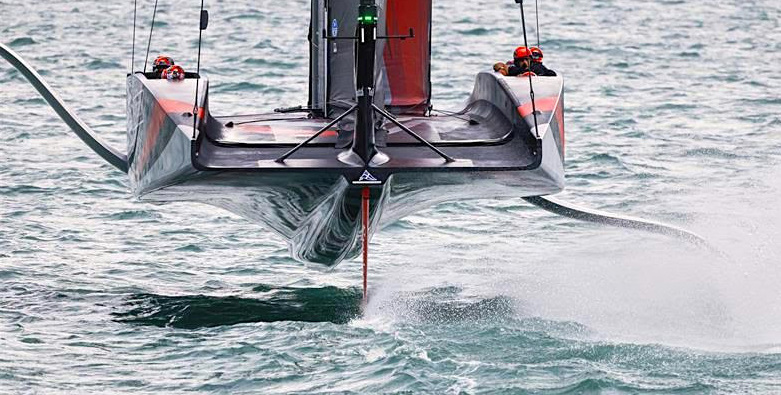 It’s been the same silly ritual every time since 1987. Within seconds of the finish of the final America’s Cup race, documents are signed and a there’s a flurry of breathless media releases announcing the details of the next challenge.

We now know that the Challenger of Record for AC37 will be Royal Yacht Squadron Racing, a corporate vehicle created by the Royal Yacht Squadron to protect the UK club’s members from liability if any financial disasters flow from their challenge. (Surely that’s an indicator, in itself, that the Cup has grown too large, complex and expensive and has become a distorted expression of its original sporting intent.)

But what we don’t know is how many races there will be, or even where the event will be held.

Now that the Cup is a free-standing commercial entity it’s location can be sold to the highest bidder – usually a city that falls for the shopworn old sales pitch that hosting the event will attract world attention and billions of tourist dollars. The NZ government has already slammed down $5m just to keep the ETNZ team together, yet there’s no guarantee the next Cup will be sailed in Auckland.

The new “Challenger of Record” is, in truth, the giant INEOS chemicals conglomerate. But by using the RYS as their proxy, Monaco-based squillionaire Sir James Ratcliffe’s corporation complies with the Deed of Gift provisions. DoG challenges have, in recent times, produced some bizarre best-of-three-race series, notably San Diego 1988 and Valencia 2010.

For their part, the defenders, Emirates Team New Zealand (sponsored by that well-known Kiwi company Emirates Airlines of Dubai), have issued a media release distinguished by its surprisingly defensive tone. It is as if the winners are keen to demonstrate that they have listened to the persistent critics of what the America’s Cup has become.

While the current AC75 class will remain for the next two series (although that could change if NZ loses in 2024), each syndicate will be restricted to one new boat. This is explained as a gesture aimed at reducing costs. That’s an admirable goal, yet it has never been achieved since the Cup downsized from J-boats to 12 metres after WWII. The costs have kept rising for every new challenge and defense.

In the face of that reality, the ETNZ media release includes this pious promise:

“The Defender and the Challenger of Record, will be investigating and agreeing a meaningful package of campaign cost reduction measures including measures to attract a higher number of Challengers and to assist with the establishment of new teams.”

Don’t, for a moment, believe them. Whatever that “meaningful package” may be, the total real cost of any serious campaign will still be North of $150m. There is a similar attempt to mollify those who regret that the America’s Cup has lost its original nation v. nation spirit. Here’s the proposed restriction:

“A new Crew Nationality Rule will require 100% of the race crew for each competitor to either be a passport holder of the country the team’s yacht club as at 19 March 2021 or to have been physically present in that country (or, acting on behalf of such yacht club in Auckland, the venue of the AC36 Events) for two of the previous three years prior to 18 March 2021.”

There’s unlikely to be a mad scramble to the passport office. The rule essentially allows anyone to crew who is a national of the challenging or defending club, or has done two years of residency, or has been part of the series just concluded in Auckland. In other words, it protects the same few hired guns of the elite professional sailing community who have made the Cup their honey pot for the past decade.

(Meanwhile, there is apparently to be no restriction on the nationality of the people who now contribute far more than the crew to the success or failure of any campaign: the designers, programmers, builders, engineers, coaches, trainers and sail-makers.)

But enough of all this foreplay. We know from experience that the syndicates will bend or re-write the rules between now and AC37 to suit their interests or diminish any perceived advantage for their rivals. It’s the America’s Cup, after all.

What interests ordinary sailors more is how the actual racing could be improved. Here are a few observations prompted by watching the ten recent races in Auckland:

First, kudos are due to New Zealand for staging the Cup so successfully under such difficult, COVID circumstances. The race management (with one unfortunate exception, which we’ll come to later) was flawless and, by all accounts, the on-shore experience for the fans met expectations despite the virus.

The expense and complexity of the boats and their support technology has grown beyond reasonable limits. Immediately following AC36 the McKinsey company was boasting that their Artificial Intelligence program for ETNZ had, in effect, won the Cup. They claimed that their AI simulation program had quickly taught itself to sail the AC boats better than the skipper and crew, who then improved their skills by imitating the computer’s performance. Apparently there is no longer any place for human talent, skill or flair.

The made-for-TV courses are too narrow and short, so the opportunities for truly tactical racing are severely limited. A fractional advantage in boat speed should not, on its own, be enough to secure a win in the America’s Cup.

The pre-start period of two minutes is much too short. This forced the boats to limit their risks and usually resulted in just one engagement before they both dashed to the line on the same tack.

Even the youth match-racing circuit allows five minutes of pre-start combat. It is often the most exciting part of each race (in Auckland it was usually the only exciting part of the race). There should be more pre-start time – up to 10 minutes – for the kind of tactical battles that test sailing skill and thrill the spectators.

Restricting the boats to a jib-and-main sail plan robs the event of significant interest. Trim is minimal. In reality, the boats could be operated by remote control. Sailors – and the general audience – want to see real people pulling ropes, hoisting and dropping spinnakers, trimming, tacking and gybing.

Instead, they have to watch an incredibly complex machine crammed with electronics and hydraulics that can’t sail properly – if at all – without the assistance of huge amounts or stored power and a myriad of instant computer calculations. None of this is visible to the spectators or TV viewers.

The lower wind-speed limit (6.5 knots in Auckland) was far too low. We need no further proof of this than the unseemly sight of power-boats having to tow the AC75s until they eventually stagger up onto their foils.

When the Italians ran out of breeze in Race 8 – through no fault of their own – the race should have been abandoned. If the Race Management team decides to postpone a start because of too little breeze, then they must also abandon the race if the wind later drops below that minimum. For the current foiling monohulls a more practical lower wind-speed limit for fair racing would be 8-9 knots.

Are all these criticisms no more than a nostalgic plea for the Cup to return to the days when yachts sailed with their hulls in the water? Well, it was easy, a generation ago, to scoff at those red-trousered, straw-hatted, blazered buffoons of the New York Yacht Club America’s Cup Committee. But at least they kept the event within reasonable, human dimensions.

True, they answered to no-one and twisted the rules, yet the racing they controlled was straightforward, easy to understand and adhered to its fundamentals for decades. It connected directly with every keen sailor, and also attracted the interest of many non-sailing sports fans.

Progress can never be stopped or reversed, but the Cup in its present form has been incited into such rapid and extreme development that it risks losing all relevance.

There is no ‘trickle down’ benefit to we lesser mortals of the sailing world. There will be no swing-foil monohulls in the next Transpac; the Etchells will not be adopting twin-skin mainsails; AI-driven hydraulic trim will not appear in the Laser class.

There must be a simpler way.

Title inspiration thanks to Schooly D.

clean up in aisle pacific