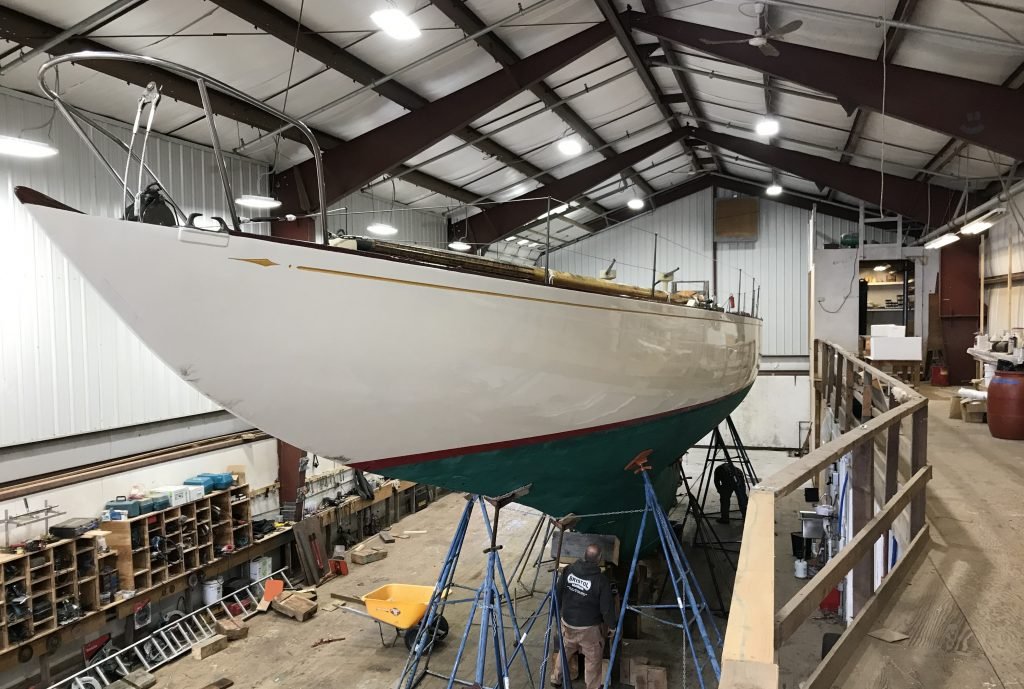 As a teenager growing up in the Midwest, Andy Tyska papered his bedroom walls with posters and photographs of classic yachts. Among his collage was a copy of what might be considered the most famous American yachting photograph ever taken: Stanley Rosenfeld’s black-and-white image of two beautiful 12-meter sloops, their spinnakers pulling at their seams. One in hot pursuit of the other.

Little did Tyska know then that one day the leading yacht in that photograph—the 1937 Clinton Crane-designed Gleam—would fall into his hands, and that he would become part of the yacht’s storied history.

“I’d seen her sailing around New England after first visiting here in 1993,” recalls Tyska, who trained as a naval architect under the direction of Ted Hood and later founded Bristol Marine in 1998. “I didn’t realize until I was going through photo albums and ran across a photo of my childhood bedroom that she was included in the collage. Those pictures on my wall made an impression on me and drove me to where I am now, working in the marine industry in New England.”

Tyska partnered with one of the yacht’s former captains and marine industry veteran, Dennis Gunderson, to purchase Gleam in fall 2020. “We had known each other for years in the industry, and he has a really strong personal connection to the boat, like many who have been touch by her beauty and grace.” Tyska adds.

First thing they did was sail her up to the Bristol Marine Shipyard in Boothbay Harbor, ME, where she could undergo the first phase of her restoration. Gleam joins a fleet of pedigreed classic yachts under the care of the shipwrights and skilled technicians at Bristol Marine facilities that include Aphrodite, Belle Adventure, Ticonderoga, Ernestina-Morrissey, Blackwatch, Fawan, Ruweida, and Burma.

This winter, Tyska and Gunderson have mostly been focused on cosmetic items for the restoration, along with some modifications to the deck hardware layout and a few critical items to maintain her USCG certification. Then, over the next three to five years, Tyska and Gunderson will be targeting other areas of the boat to keep her in top condition.

Tyska is quick to acknowledge that Gleam is in remarkably good condition considering her age, thanks in great part to her former owners. “I can’t talk about Gleam without recognizing the significant efforts by Bob Tiedemann and Elizabeth (Tiedemann) DuPont and the commitment they made to her early on in preserving her. Gleam benefits from those efforts today.” You can read more about Tiedemann’s legacy with Gleam and the Newport 12-meter fleet here.

In addition to carrying on Tieddemann’s passion for classic yachts, Tyska looks forward to continuing Gleam’s tradition on the water. “We want to continue the legacy of Clinton Crane to promote the enjoyment of classic yachts. Dennis and I will be racing her, and we also hope to reconnect Gleam with the incredible amount of people that have had a relationship with her over the years through chartering and racing while introducing her to new admirers as well.”

Anyone interested in seeing Gleam in action this summer will find her in Newport, racing in the Tiedemann Classics Regatta – named for her former owner who would undoubtedly be proud to see her flying through Narragansett Bay with spinnaker aloft and the other classic yachts trailing her stern.