my cup runneth over 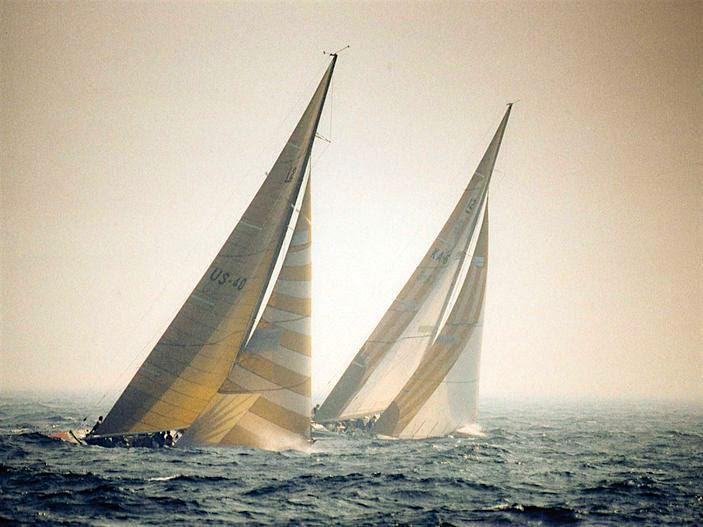 So that’s that for another three years. New Zealand retains the America’s Cup 7-3. Yet apart from the excruciating – and ultimately unfair – Race 8, and the desperately lucky (for NZ) Race 9, the contest tended towards the monotonous, predictable, even anticlimactic. The faster boat won, as it always has since 1970.

(“Unfair” because the Kiwi splashdown was a clear error of commission – they gybed into the backwind of the Italians while Luna Rossa came off their foils later in that race only because the breeze had momentarily disappeared. And “lucky” in  Race 9 because textbook tactics from the Italians handed the Kiwis an undeserved winning 20% lift.)

The short, narrow courses with boundaries designed for television limited tactical options. There was no room to take a “flyer” or hang on to a favorable shift. Meanwhile, the Hauraki Gulf failed to deliver the expected stiff breezes, so the boats rarely hit anything approaching their maximum speeds.

For the most part, watching eight of these ten races provided little more than a quick sugar hit. There were, at best, 90 seconds of genuine excitement in the pre-start, a few minutes of mild anticipation to confirm that the boat that won the start would lead at the first mark, then a five-leg procession in which there were no passes and the only real interest was to check the gap and compare VMGs and boat speeds.

Perhaps realizing that these wham-bang-thank-you-m’am encounters lacked real drama the commentators and pundits pumped up the hype and rushed to declare the ‘return of match racing’ in Auckland, or speculate about hypothetical ‘passing lanes’. Both were in regrettably short supply.

Back when AC boats kept their hulls in the water the pre-start dogfights could last up to ten minutes and made riveting viewing. Hitting the line on ‘zero’ was largely irrelevant. It was tough, aggressive, hand-to-hand combat. Circling, luffing, false tacks, bearing away – they used tactical flair, sheer sailing skill and every trick in the rule-book to gain an advantage.

Comparisons can be odious, but there are many other factors from the history of the America’s Cup that, considered against the series just concluded, might help explain why the AC36 racing at times seemed so alien to the fundamentals of the event.

Let’s take the 1983 challenge, Australia II v Liberty, as our base line. It was the last to be sailed at Newport and the second-last to be sailed in 12 metres. Here are a few ‘then and now’ comparisons:

*  In 1983 the 12 metres displaced around 23 tons and sailed at 8 knots. The boats were almost always in dueling contact. The foiling monomarans in Auckland weighed around 7.5 tons and could do 50 knots. Those high speeds multiply differences, so a small lead blew out to 500 metres or more very quickly.

*  The course in Newport was 24.3 miles, including a triangle. Every point of sailing was tested, as was the stamina and concentration of the crews. The courses in Auckland were windward/leeward only, and around 10 miles in length. It was impossible, at a glance, to tell whether the AC75s were sailing uphill or downhill.

*  The average elapsed time in Newport was roughly 4 hours, with a time limit of 5 hours and 15 minutes. Mistakes could be corrected, gear failures overcome. The races in Auckland took between 25 and 40 minutes to complete – one eighth of the time. Losing the start, even by a few seconds, was usually fatal.

More significant than those stark physical contrasts are the different styles of racing.

Until the carbon multihulls took over the Cup, all boats sailed with poled spinnakers. This added a significant tactical dimension and put a premium on crew work. One botched gybe could cost a race; a perfect delayed drop and mark rounding might win one. Each maneuver was a crucial – and visible – test of teamwork and skill.

In Auckland, eight of the eleven crew in the AC75s spent their race below gunnel level, heads down, just grinding. They were proxy engines, and rarely, if ever, touched a line or control. Sail trim was a matter of inches. To television viewers it is was if the jib and main were kept sheeted on hard for the entire race. Helming was like steering a car.

The closeness in performance of the 12 metres encouraged epic boat-on-boat battles. It was not uncommon for them to throw 30 tacks at each other on a single upwind leg. Yet in the third race in 1983 Liberty and Australia II stayed on the same tack for 22 minutes, each daring the other to break away. Multiple lead changes and come-from-behind wins were not exceptional 30 years ago. The tension for spectators was exquisite.

This year, during one sequence of 14 Prada Cup races in Auckland, the lead never changed over the 84 legs sailed – except once, when the American Magic capsize let Luna Rossa through. Then, during the Cup itself, there were just two or three genuine passes in the 59 legs sailed. It was difficult to get excited by those repetitive processions. One small mistake and it was usually game over.

None of this is to say that the event in New Zealand wasn’t worth watching. It was the America’s Cup, after all, even if – bizarrely – the worst mistake a crew could make was to actually let their ‘boat’ touch the water.

Perhaps the most revealing aspect to emerge from the series, at least for me, was that sheer speed doesn’t matter. It’s the differential that counts. Close racing is just as engrossing at 5 knots as it is at 40. All those hundreds of millions of dollars spent developing foiling monomarans might have kept a lot of sailing folk in work but it delivered no real extra value to the event. Watching boats duel at 30 knots quickly became unremarkable.

And if it showed us anything, this competition between two low-flying seaplanes demonstrated that the pinnacle of sailing now has virtually no practical connection with what most of us know as ‘yacht racing’. Nor is it likely to have popularized the sport. The general public, if they were aware of the event at all, would have been utterly bemused.

Let’s hope that the next America’s Cup is contested in boats. Jump in the thread to discuss.

what would benj do?