maybe buy an rv next time? 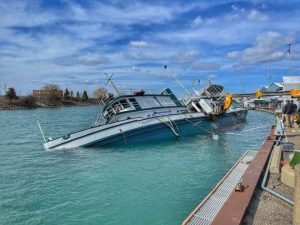 An old towboat that the Bayview Yacht Club in Detroit was using as a temporary clubhouse while it renovates its permanent one sank Sunday afternoon in Connor Creek.

The club is closed Monday, and members could not be reached for comment.

But images of the Queen City going down were captured by a local towboat captain, Alex Haggart, who happened to be in the area when the boat went down. Photos show the boat listing and then sinking.

“I couldn’t tell you what happened,” Haggart said late Monday morning, noting that he doesn’t think anyone was injured. “Except, the boat is supposed to be in the creek, not the creek in the boat.” Read on.